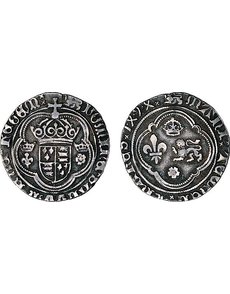 A rare silver coin or jeton issued by Perkin Warbeck, a pretender to the throne during the reign of King Henry VII, highlights the Frank Brady Collection of English Hammered Groats, offered Oct. 6 by Spink.

A specialized collection of English silver groats will be offered at auction Oct. 6 in London.

Spink is auctioning the Frank Brady Collection of English Hammered Groats, a collection created during more than 30 years by Brady, a surgeon.

Brady first became interested in coin collecting while working as an associate professor at the University of California Los Angeles during the late 1970s.

He soon developed the goal of building a collection of “Good” grade English hammered groats, and “building up the collection has given Frank much pleasure,” according to the catalog.

The English groat (or fourpence coin) traces its history back to 1279 when it was introduced during a coinage reform of Edward I as an alternative to the silver penny. After the public exhibited some resistance to the fourpence because its weight was less than four of the pre-reform pennies, the denomination was shelved from 1280 to 1351 when it was revived. It was issued for regular circulation through 1662, and since then has only made limited, specific appearances, such as in Maundy sets and in certain British colonial usage.

“Groats gradually ceased to circulate generally except for a revival in the mid 19th century,” writes Peter Woodhead, in an essay preceding the lot listings in the catalog.

A highlight of the 387 lots (which are cataloged in a 128-page catalog) is the circa 1494 coin or medallic jeton of Perkin Warbeck, a pretender to the British throne during the reign of King Henry VII. It imitates the style of the groats then in circulation.

The silver coin weighs 3.77 grams and is a remnant of the ruse perpetrated by Warbeck, who passed himself off as Richard, Duke of York, following the disappearance of Edward IV’s sons and the death of Richard III at the Battle of Bosworth. Failing support, “Warbeck gave himself up at Sheen and confessed all. He was subsequently tried and hanged on 29 November 1499,” according to the catalog.

The complete catalog may be viewed or downloaded as a PDF from a link at the firm’s website, www.spink.com/auctions/pdf/11039.pdf. The lots also may be browsed online by accessing the auction through www.spink.com/asp/cataloguesearch.asp.