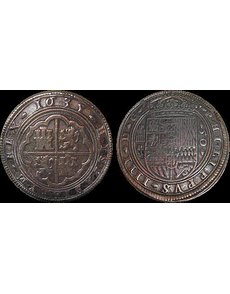 A 5-ounce silver Philip IV piece is not a coin as a reader initially suspected but rather a medal, issued by a jeweler in Zaragoza, Spain. Authentic 50-real coins were used as presentation pieces from the monarch.

I appreciate your help with identifying this 1635 coin.

It measures right at 70 millimeters in diameter, and weighs 168.71 grams. The denomination is 50 reales and was struck at the Segovia Mint. The coin came in a box from Ven Agueras Joyeras Zaragoza, Spain.

I also found an online book that gives the entire history of Segovia’s coin-making heritage, which was fascinating.

The digital images provided make it a stretch to consider this piece an authentic coin. Experts we contacted in Latin American and Spanish coinage indicate the pictured 1635 silver 50-real piece of Philip IV is a replica.

Presence of an apparent silversmith’s or jeweler’s mark and the letters RE (perhaps for “reencidido,” meaning “restrike”) and the fact that the name on the box issued with the medal is a jeweler seem to back that diagnosis.

Augustin Garcia of the Daniel Frank Sedwick auction firm and Juan Cayon of Cayon Numismatics independently viewed digital images. Each concluded that the images do not represent an authentic example of the rare 50-real coins.

Limited numbers of the genuine, large coins (which measure almost 3 inches in diameter) were created to be distributed as presentation pieces, a common use of coinage in Europe at the time (a custom that in some corners has not died out).

Though the reader’s image has coppery highlights, the medal is apparently .925 fine silver, with the apparent color either from toning or the lighting used during photography. The piece is 5 ounces, matching the originals’ weight.

The Segovia Mint operated for more than 400 years, after King Henry the IV authorized construction in 1455.

The local aqueduct was adopted as Segovia’s Mint mark and the symbol remained in use until 1868, when a second minting facility that had opened in 1586 finally closed. Both facilities struck coins simultaneously for about a century, with hammered coins produced at the Old Segovia Mint and the newer facility employed for milled coin (machine-struck) production.

Over the past few decades, the Friends of the Segovia Mint have been active in restoring the second facility and keeping alive its history.

While the Friends of the Segovia Mint has issued restrikes, your medal is not among their commemorative issues.

For information about the Segovia Mint and efforts to keep its memory alive, visit the website www.segoviamint.org.