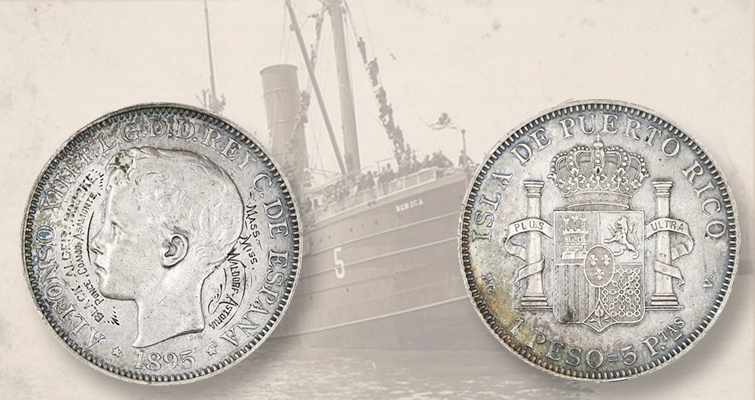 An 1895 silver peso from Spanish Puerto Rico is engraved with a soldier’s service record during the Spanish-American War.

The Spanish-American War was a turning point for American imperialism, with America obtaining Puerto Rico and the Philippines for its efforts.

That American military engagement is often overshadowed by the much larger and more important conflagrations that swept the world about 15 and 40 years later, respectively: World War I and II.

But American soldiers fought in the Spanish-American War, including one man memorialized today only through a numismatic memento he created.

An 1895-PG-V silver peso from Puerto Rico (under Spanish rule) was engraved by a serviceman from Brooklyn, New York in service with Troop C of the New York Volunteer Cavalry during the Spanish-American War.

The item is offered in Daniel Frank Sedwick’s Treasure Auction No. 25 May 2 and 3, though the firm provides no additional details about the servicemember.

His story during the war is carved into this coin, as Troop C moved from Camp Black, New York, to Camp Alger, Virginia, then on to Camp Brooke, Virginia (each camp’s identifying name is engraved on the obverse).

They then sailed aboard the USS Mississippi (abbreviated as “Miss.” on the coin) to Puerto Rico, eventually landing and marching on Ponce by Aug. 8.

The troop then moved on Coamo and played a pivotal role during the Battle of Coamo by pushing and chasing the Spanish troops from their position. Troop C followed the Spanish troops back to Asomante (spelled “Asamonte” on the coin) where they came under artillery fire from an entrenched Spanish battery.

In conjunction with the 3rd Wisconsin Volunteer Infantry, Troop C pushed the Spanish soldiers from their position. Upon the signing of the armistice between the United States and Spain, Troop C left Puerto Rico on Sept. 3, 1898, aboard the Mississippi for New York.

They arrived on Sept. 10 and, after a period of furlough, were mustered out of service Nov. 25.

The coin’s text also mentions the Waldorf-Astoria, referring to a veterans meeting at the hotel, likely after the 1899 parade for Adm. George Dewey.

Troop C of the New York Calvary, commanded by Capt. Charles I. DeBevoise, participated in the parade.

The event ended with a reception at the Waldorf Astoria, thereby completing the journey depicted on the coin.

The firm grades the coin About Uncirculated, noting that it is “lightly cleaned with rainbow toning on reverse around rims.”

Engravings on Puerto Rican pesos are very rare, according to the firm, which designates this item with an estimate of $1,500 to $3,000. 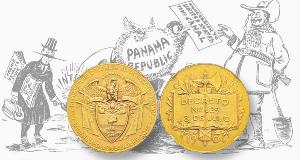 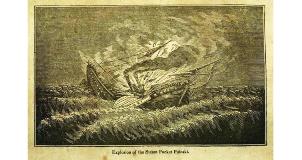