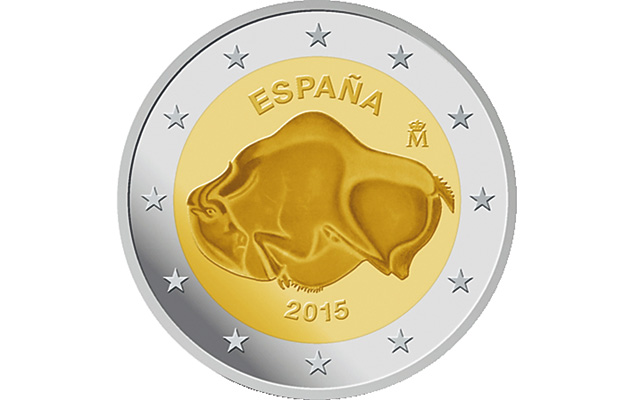 Spain’s 2015 €2 commemorative coin dedicated to the Cave of Altamira is the sixth issue in the UNESCO World Heritage Series of €2 coins.

In 2015, Spain will continue its annual series honoring that nation’s UNESCO World Heritage Sites. In the sixth year of the program, the coin will feature the caves and cave art of Altamira.

The obverse of the €2 coin depicts a bison from the famous paintings inside the cave.

The caves — dubbed the “Sistine Chapel of Paleolithic art" — were closed for 12 years until reopening earlier in 2014.

The cavern system was designated a World Heritage Site by UNESCO in 1985. It is covered in paintings dated to between 14,000 and 20,000 years ago, of animals including European bison and bulls.

Not every nation issues circulating commemorative €2 coins, and some chose to issue only one special design annually.

The reverses of euro coins carry one of three common designs, all showing various maps of Europe and the earth.

The €2 ringed-bimetallic coin is the highest denomination in circulation in the eurozone.