Spain marks 70 years of peace in Europe with collector coins 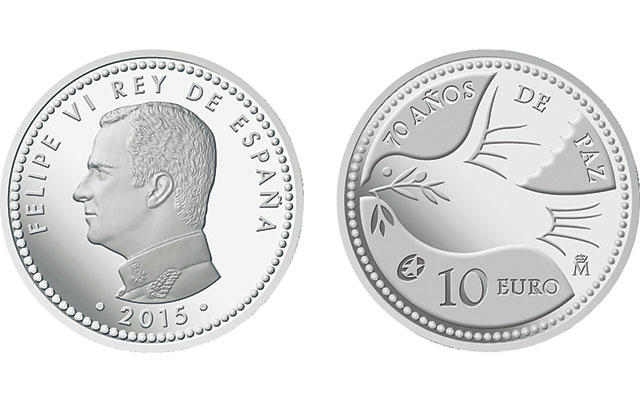 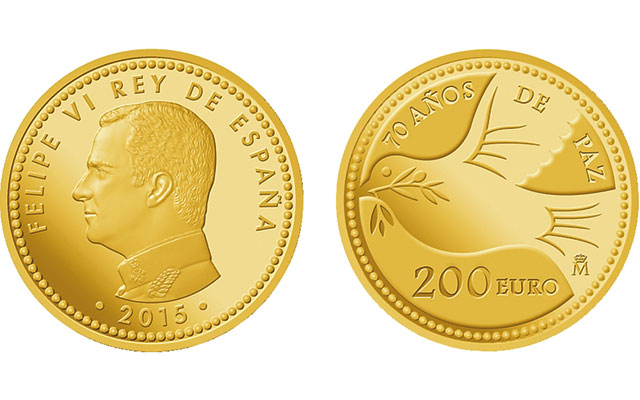 The Royal Spanish Mint is also issuing a Proof .999 fine gold 200 coin to comemmorate 70 years of peace in Europe after World War II.

The Royal Spanish Mint is among a group of European mints honoring the 70th anniversary of  World War II’s conclusion with commemorative 2015 coins.

The coins share common designs, except for the denomination markings on the reverse.

The obverse of each coin depicts the new king of Spain, Felipe VI. These are the first Proof coins bearing his singular effigy, according to the Royal Spanish Mint.

The reverse design shows a dove holding an olive branch in its beak, a universal symbol of peace. Inscriptions in Spanish note the 70th anniversary of peace. The eurostar symbol, used in a joint coin program from European mints dubbed the “Europa star program” or “European coin program” graces the reverse as well.

The silver coin weighs 27 grams, measures 40 millimeters in diameter and has a mintage limit of 7,500 pieces.

The gold coin weighs 13.5 grams, measures 30 millimeters in diameter and has a mintage limited to 2,500 pieces.

The official issue prices have not been disclosed.