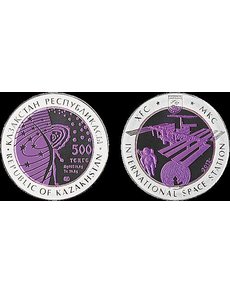 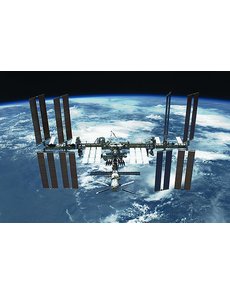 The International Space Station as seen after the space shuttle Endeavour undocked on May 29, 2011.

Tantalum, a gray metal, is critical in the aerospace industry because of its high melting point and strength. But tantalum is bright purple on one coin in an annual series honoring the former Soviet Socialist republic and the journeys into space that are launched there.

According to the National Bank of Kazakhstan, this is the first coin to use tantalum in color, though neither the bank nor the Kazakhstan Mint revealed how the color was achieved. Similar color changes are achieved on niobium, a similar metal, through heat treatment.

The International Space Station is the subject of two coins: a Proof 2013 500-tenge coin and an Uncirculated copper-nickel 50-tenge coin. The 500-tenge coin is composed of a .925 fine silver ring surrounding a tantalum core.

Kazakhstan is the site of Baikonur Cosmodrome, the home of Russian space launches, which have included missions to the multinational ISS.

The space station, including its large solar arrays, spans nearly the area of a U.S. football field, including the end zones, and weighs 924,739 pounds. Astronauts recently began the 38th mission to the ISS since the arrival of Expedition 1 on Nov. 2, 2000.

The station appears on the reverse of both coins, with both obverses bearing designs that are common to the other coins of the Space program, which began in 2006.