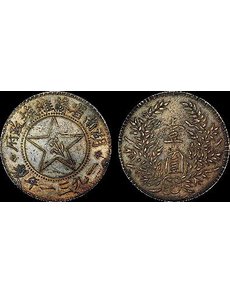 A silver dollar struck in Hunan, China, during Soviet rule highlights Stack’s Bowers and Ponterio’s April Hong Kong auction. Though cleaned, the coin is graded About Uncirculated. It has an estimate of $150,000 to $200,000.

A silver dollar struck in Hunan China by the controlling Soviet government in 1931 is an example of a coin being used as a tool of propaganda.

The obverse of the coin, which highlights Stack’s Bowers and Ponterio’s April 1 to 3 auction in Hong Kong, displays the Soviet hammer and sickle symbol within a large star, both elements within a circle and beaded border. Chinese inscriptions encircle these central design elements, the inscriptions positioned between the beaded inner circle and the coin’s rim.

The 1931 date in Chinese deviated from the traditional presentation, which would have noted the regnal year, in this case the 20th year of the Chinese republic. “This was done intentionally to make the statement that the Hunan Soviet Government was the new governing body,” according to the lot description.

Only a small number of examples are known to exist. This coin can be considered one of the first dollars of the People’s Republic of China, according to Stack’s Bowers and Ponterio.

Evidence of cleaning in the past is toned over today and the coin is in About Uncirculated condition, according to the firm. The coin is encapsulated as Genuine — Cleaning in a Professional Coin Grading Service Secure holder.

The coin is one of many highlights from numerous consignments, including the Dr. John Abner Snell Collection, Part II from the Frank Robinson Collection, the Gen. M.S. Newton/Kenneth Bressett Collection and Part III of the Wa She Wong Collection. In total, the firm offers 1,750 lots in the first of three Hong Kong auctions it is conducting from April 1 to 4.