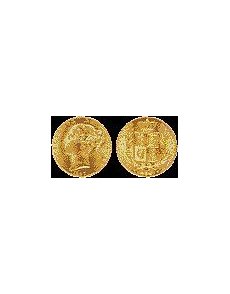 A new record price for a British sovereign was established during Bonhams’ Dec. 14 auction. The coin, in “virtually Uncirculated” condition, realized £34,800 ($54,206 U.S.), including the buyer’s fee

An 1841 gold sovereign of Queen Victoria established what Bonhams said is a record price for a sovereign during a Dec. 14 auction conducted by the auction firm.

Cataloged as Seaby-3852 in Coins of England and the United Kingdom (which was originally published by Seaby but is now published by Spink), the “virtually Uncirculated” coin “is probably one of the finest 1841 Sovereigns in existence.”

A private collector in the United Kingdom purchased the coin, according to Bonhams.

For more information about the auction or future Bonhams coin and medal sales, visit the firm’s website, www.bonhams.com, email it at coins@bonhams.com or telephone it at (011) 44 20 7393 3914. ¦