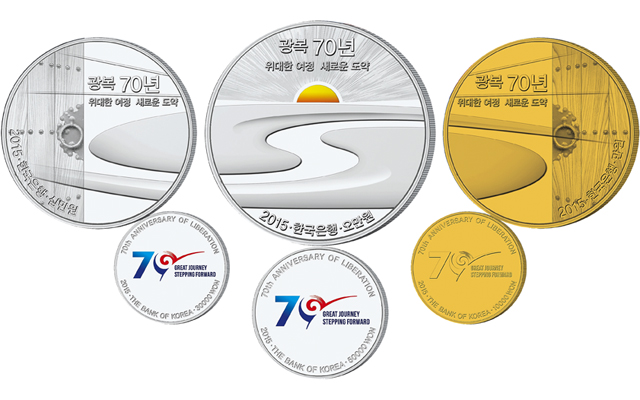 The Bank of Korea is issuing three noncirculating commemorative coins to mark the 70th anniversary of liberation following World War II. When displayed side-by-side, the coins present a complete image.

The Bank of Korea is commemorating the 70th anniversary of liberation from Japanese rule following World War II with three 2015 collector coins.

The coins are designed so that each obverse presents part of an overall design. Placed side-by-side, the coins complete an image that shows a traditional Korean gate opening to the curves of a Taegeuk symbol forming a path toward a rising sun.

The coin reverses share a design of English inscriptions: the denomination, bank name, 70TH ANNIVERSARY OF LIBERATION and, in color on both silver coins, a 70 logo and GREAT JOURNEY / STEPPING FORWARD.

The coins are due for release Aug. 12.

The Bank of Korea is currently accepting orders from dealers, and will distribute the coins at the time of release.