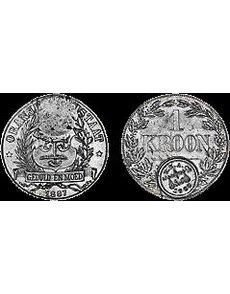 The pattern, produced by W. Lauer for O. Nolte, features an 1888 British East Africa countermark that is “strategically placed over the word essay, giv[ing] a pattern coin legal tender status,” according to research cited by the auction house. The seller suggests fewer than 10 pieces are known.

With a few marks, the coin is “otherwise” in Nearly EF condition.

The pattern was one of the highlights of the collection of George de Bruin, a pathologist from South Africa. The collection has a particular focus on coins of South Africa and those that traded around the Cape of Good Hope.