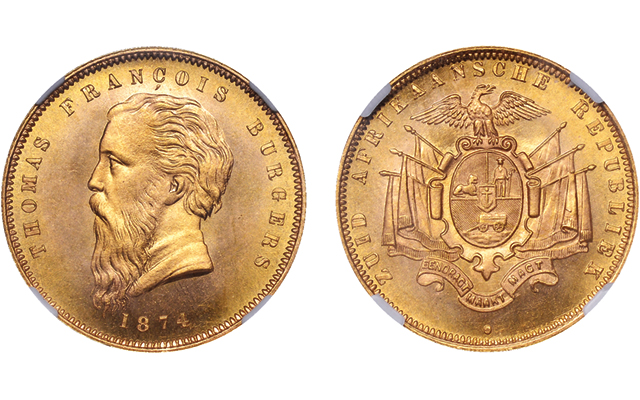 The collection of South African coins assembled by the late Frank Mitchell in total realized £272,820 ($327,384 in U.S. funds) including the 20 percent buyer’s fee, representing nearly 40 percent of the overall results. Six of the top seven performing lots in the sale were from the Mitchell Collection, which formed 63 lots of the 1,137 lots in the auction.

Leading the auction was the £93,600 ($157,107 U.S.) realized, including the fee, for the 1874 Burgers gold pond coin, Fine Beard design, which is South Africa’s first gold coin type. Graded Mint State 67 by Numismatic Guaranty Corp., the coin is reportedly the finest known example of the rarity

Both versions of the 1874 Burgers gold pond feature an image of an early president of the South African Republic, Thomas Burgers.

The true mintage of the Burgers pond coins may never be known, but experts suggest 837 were made, most (reportedly 695) in the Fine Beard version; the balance (142) are of the Coarse Beard design. The most observable difference between the two design variants involves the end points of Burgers’ beard: the points are coarser on the scarcer version than on the other.

Burgers served as president from 1872 to 1877. While serving in the position, he sought to have a new gold coin made using metal mined in South Africa, so he contacted Ralph Heaton & Sons in Birmingham, England. The private mint commissioned Royal Mint engraver Leonard Wyon to design and prepare the dies.

The obverse of the coins features an image of Burgers, as created by Wyon, and the reverse shows the coat of arms of the fledgling republic.

Burgers supplied the gold specie, mined in the Transvaal.

Once the coins arrived from England, Burgers showed them to members of the Volksraad (Parliament), who quickly objected to the coin, since the legislative body had never been consulted, and also because the coins showed Burgers’ portrait.

While South Africa would adopt the gold pond in 1892, based on the English sovereign, Burgers’ attempt was rejected, and many examples were then sold to the public at twice their metal value and so became mementoes of the failed experiment. Many were used in jewelry, and few examples are so well preserved. After the Boer War, the coin’s rarity was publicized, and the coin has been a famed South African rarity for a century.

Dix Noonan Webb will continue to auction “important” South African coins, the firm stated, pointing to the auction in September of what DNW calls “the world’s greatest collection of South African coins assembled,” a collection built by Robert Bakewell which is expected to realize more than £2.2 million (more than $3.7 million U.S.).