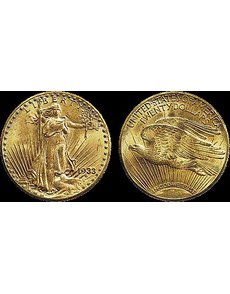 The 1933 Saint-Gaudens gold $20 eagle, shown, one of two in the National Numismatic Collection at the Smithsonian, is being taken on a seven-nation European exhibition tour, beginning March 3 and 4 in London.

One of two 1933 Saint-Gaudens gold $20 double eagles held in the National Numismatic Collection at the Smithsonian Institution since 1934 is making its way to London for a March 3 and 4 exhibit, the first leg of a seven-nation European tour.

The tour represents the first time that a 1933 double eagle has been publicly exhibited in Europe.

“The 1933 double eagle is a symbol of a shared struggle in an interdependent global economy, both in the early 20th Century and today.”

He added, “We are delighted to make one of the greatest treasures of the Smithsonian available to European audiences as part of this unprecedented tour.”

The 1933 double eagle’s tour was arranged in conjunction with the Smithsonian by the Samlerhuset Group B.V. (online at www.samlerhuset.com), a global numismatic marketing firm headquartered in Almere, Netherlands, selling coins, commemorative pieces and related collectibles.

According to Smithsonian officials, all of the costs associated with the tour, including the participation of any Smithsonian curatorial and support staff, are being borne by Samlerhuset.

Samlerhuset is also financing the mounting of the exhibit, security for the coin while on exhibit, and transfer to and from the seven venues, according to Smithsonian officials.

While the exhibit structures will be shipped between venues by ground transport, the coin is being transported independently by a contracted security detail whose costs are being underwritten by Samlerhuset.

The coin will be accompanied by a carnet — a merchandise passport — to allow problem-free passage through customs in each country, according to Smithsonian officials.

Smithsonian officials agreed to the proposal since it will help the museum to extend its outreach and to open and maintain dialog and education exchanges with the venues at which the 1933 double eagle will be displayed.

Peter Swanston, Samlerhuset chief executive officer, said company officials for a long time have wanted to bring one of the Smithsonian’s two 1933 double eagles on tour “to show this remarkable piece of U.S. financial and numismatic history to a European public.”

Swanston said based on the firm’s experience of bringing other numismatic rarities on exhibition in and around Europe, “we knew interest in these kinds of coins is huge. We also knew we had the ability and capability to bring the coin safely on tour.”

“As one of the main international coin collection companies, we want to increase the general knowledge and interest in coins and coin collecting,” Swanston said. “Owing to its legendary status and its status in the financial history of the USA and the world economy, the 1933 double eagle will catch people’s interest way beyond traditional numismatic circles. This coin in simply too interesting and its history too fascinating to keep from a European audience.”

While Swanston did not disclose the estimated costs associated with the tour, he emphasized the tour is well worth the expense.

The London stop takes the 1933 double eagle to Goldsmiths’ Hall on Foster Lane, where the coin will be on public exhibit from 10 a.m. to 4 p.m. March 3 and 4. Admission is free.

The Goldsmiths’ Company (www.thegoldsmiths.co.uk/), one of the Twelve Great Livery Companies of the City of London, received its first royal charter in 1327.

Founded to regulate the craft or trade of the goldsmith, the Goldsmiths’ Company has been responsible since 1300 for testing the quality of gold and silver, and from 1975, platinum articles. In 2010, testing palladium was added to the company’s responsibilities.

Under an 1870 act, Goldsmiths’ Hall was legislated as the venue for the annual Trial of the Pyx for testing the metallic composition of British coins.

The remaining six stops on the numismatic tour for the 1933 double eagle, and hours of public exhibition, where known, are:

Only one legal to own

The U.S. Treasury Department contends that it never officially released the 1933 double eagle into circulation.

Thirteen pieces of 445,500 coins struck are known to have survived government melting furnaces.

An uncertain number of 1933 double eagles escaped into the marketplace, with most if not all transactions originating with a Philadelphia jeweler and coin dealer. In the 1940s and 1950s, the Secret Service identified and confiscated 10 examples sold by the dealer, all of which were melted.

One of the coins sold by the dealer eventually went to Egypt’s King Farouk. Farouk was able to remove his example from American soil in 1944 using an export license mistakenly granted Feb. 29, 1944, by the U.S. Treasury Department to the Egyptian Legation.

Farouk’s monarchy was toppled by a military coup in 1952, and two years later, the 1933 double eagle disappeared soon after the U.S. State Department requested it be withdrawn from the public sale of The Palace Collection, Farouk’s personal numismatic collection.

The coin purported to be the Farouk example surfaced during a Feb. 8, 1996, Secret Service sting operation at the Waldorf-Astoria Hotel in New York City. The dealer from whom the coin was confiscated and the federal government fought over ownership in court.

The coin, as part of a January 2001 court settlement, was sold July 30, 2002, by Sotheby’s, in conjunction with Stack’s, during a single-coin, nine-minute, public auction.

With buyer’s premium, the coin sold for $7.59 million, with the anonymous buyer paying an additional $20 to the federal government to monetize the piece. The hammer price of $6.9 million was split between the U.S. Mint and Stephen Fenton, the British dealer who imported the coin into the U.S. in 1996.

The coin, which U.S. Mint officials determined was struck with the same pair of dies that struck the two examples in the National Numismatic Collection, is currently on display at the Federal Reserve Bank of New York.

Ten other 1933 double eagles are known to exist. They are currently housed at the U.S. Mint’s Fort Knox Gold Bullion Depository in Kentucky.

The 10 pieces were turned over for authentication to the U.S. Mint in September 2004 by the family of Philadelphia jeweler Israel Switt, who reportedly acquired the coins directly from the Philadelphia Mint and is the same dealer who marketed the coins in the late 1930s and early 1940s. Switt acknowledged in an interview with Secret Service agents in the 1940s that he had sold some examples of the coins to others.

Until the 10 pieces surfaced, Mint officials believed that all extant examples had been recovered and melted.

The seizure triggered a nearly six-year-long legal battle by Switt’s heirs (his daughter and two grandsons), who sought to have the 10 gold coins returned.

The court case culminated in July 2011 with a federal court jury in Philadelphia ruling in favor of the federal government, supporting the claim the coins were not legally obtained, but were stolen government property. ¦

Editor's note: The wrong images were provided with a press release and used in the print and digital editions of this article in the Feb. 27 issue of Coin World. The correct obverse and reverse are used here.