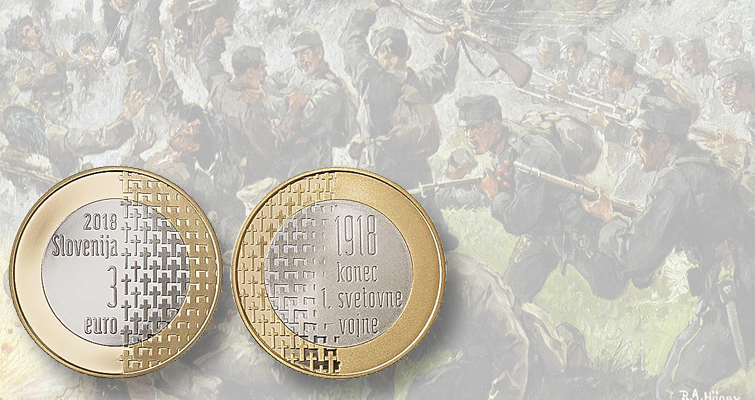 Slovenia’s newest ringed-bimetallic €3 coin marks the centennial of the end of World War I with a symbolic design.

Slovenia has issued a 2018 commemorative €3 coin to commemorate the centennial of the end of World War I.

The ringed-bimetallic coin highlights the modern nation’s role in the war.

The Soca (Isonzo) Front, running through Slovenia, was one of the bloodiest fronts of the war. More that 1 million casualties were sustained in a series of 12 battles between Austrian and Italian forces, yet little ground was gained by either side.

The end of the war, however, was a significant turning point in Slovenian history.

Slovenia gained independence from Austria-Hungary and joined with other Slavic nations to form what eventually became Yugoslavia.

WWI changed the idea of war after that time, along with the geographical and political map of Europe and the world, and heralded the rise of the United States as a new world superpower.

The coin was designed by Robert Žvokelj.

Both sides depict a series of crosses gradually enlarging into a blur, symbolizing the unimaginable and unknown number of victims of the war.

Dealer Joel Anderson has acquired examples of the coin, which are available for $9.50 each plus postage. 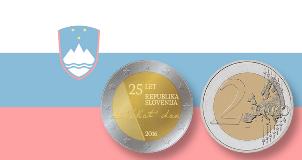 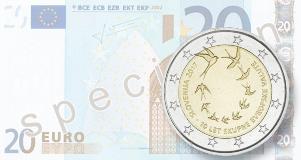 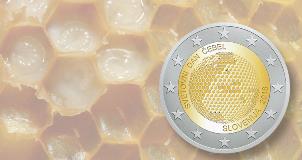