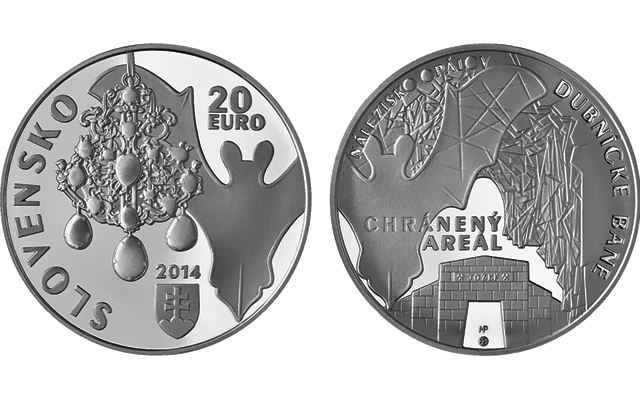 Slovakia’s history of opal mining is celebrated simply on a new .925 fine silver €20 collector coin, available in both Proof and Brilliant Uncirculated finishes.

Images courtesy of the National Bank of Slovakia.

At a time when many coins feature precious stones or jewels embedded or encased within them, a new coin from the National Bank of Slovakia and the Kremnica Mint is a throwback.

The 2014 .925 fine silver €20 coin celebrates with simplicity the opal, which was mined in Dubník, an area in southwest Slovakia.

Until the discovery of opal fields in Mexico and Australia in the 19th century, Dubník was the only site of opal mining in the world. Australia’s present peak opal mining output is similar to that of Dubník some 150 years ago, according to the National Bank of Slovakia.

Opal mining at Dubník ended in 1922, though efforts are currently being made to reopen the mines.

The obverse of the coin portrays Isabella’s necklace, which was presented to Isabella Jagiellon in 1539 upon her marriage to John Zápolya, the king of Hungary.

The necklace is made of gold and decorated with 16 irregularly brushed precious Dubník opals.

In the background of the coin is the silhouette of a bat, as the Dubník mines provide an important wintering site for the creature.

The obverse also bears the national emblem of the Slovak Republic and the year of issue, 2014. The name of the state SLOVENSKO is inscribed on the left side of the coin.

The reverse of the coin features a bat silhouette in the mine’s interior. The bottom portrays a tunnel entrance characteristic of the Dubník mines, with the inscriptions NÁLEZISKO OPÁLOV (“opal field”) and DUBNÍCKE BANE (“Dubník mines”). Stylized initials MP of the coin designer, Mária Poldaufová, are located at the bottom, adjacent to the rim of the coin, along with the Kremnica Mint’s mark.

It is inscribed on the edge OSOBITOSTI PRÍRODY SLOVENSKA, translating to “Special features of Slovak Nature.”

The coin weighs 33.63 grams and measures 40 millimeters in diameter

The coin has a mintage limit of 2,750 pieces in Brilliant Uncirculated and 5,300 pieces in Proof.

The coin does not appear to be available through any official distributors or the mint, so collectors will have to seek this coin in the secondary market.