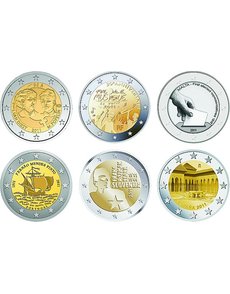 Belgium, France, Malta, Portugal, Spain and Slovenia will issue circulating commemorative €2 coins in 2011 to mark a wide array of events. Themes include International Women’s Day, a music festival, the Maltese Constitution, a famed explorer, a historic courtyard at a fortress and a national hero for Slovene independence, respectively.

Six eurozone countries have revealed the subjects and designs of their circulating commemorative €2 coins to be issued later in 2011.

Issue dates and mintages for the coins are not all confirmed, but images of most of the coins have been released by the European Commission’s Economic and Financial Affairs Committee.

Joint programs like those in 2007, marking the Treaty of Rome’s 50th anniversary, and in 2009, coins for the euro currency’s 10th anniversary, do not count toward that limit.

On the national or commemorative side of each €2 coin, the 12 stars of the European Union flag appear on the outer ring, with the commemorative design assigned to the center piece.

Belgium marks the centennial anniversary of International Women’s Day, which is celebrated on March 8 around the world, with its circulating commemorative €2 coin.

Their names and professional symbols are shown underneath on either side of the year 2011.

Above the major design elements are the Mint master mark and the Mint mark, as well as be, representing the nation.

A total of 5 million coins are to be released in March.

France celebrates the 30th anniversary of the Day of Music with its coin, due for release in June.

The national side of the coin depicts a cheerful crowd, with a stylized image of a musical instrument and notes floating in the air, denoting the atmosphere of celebration on the Day of Music, which has been celebrated in France every summer solstice since 1981.

Legends translating to “30th anniversary,” “music festival” and the date, June 21, 2011, appear above the scene.

Ten million coins will be issued, possibly in conjunction with the 2011 festival.

The first coin commemorates the election in 1849 of the first Maltese representatives to the Council of Government advising the British governor.

Malta had been a British colony since the 1814 Treaty of Paris.

The national side of the coin depicts a hand placing a voting card into a ballot box, which is surrounded by malta — first elected representatives 1849.

A mintage of 430,000 coins is expected. No release date has been announced.

Portugal will commemorate the 500th anniversary of the birth of Fernão Mendes Pinto, the Portuguese explorer of the Asian seas and countries, with a coin to be released Sept. 15.

Peregrinação (Pilgrimage) is the title of Pinto’s book of discoveries and adventures. It was published posthumously.

The center of the coin depicts a sailing ship on several wave-shaped inscriptions referring to Portugal, Pinto’s book and some of his travel destinations. The years 1511 and 2011 also appear on the commemorative side.

According to sources, 520,000 coins are expected to be issued.

The national side of the 2011 coin features the Patio de los Leones (Court of the Lions) at the Alhambra, the fortified castle in the city of Granada.

The Moorish castle was constructed in the 14th century and is an artifact of Muslim influence in what is now Spain.

The series began in 2010 and continues in the order in which each site came under the UNESCO umbrella.

Eight million coins will be released in March.

In 2011, Slovenia marks the birth centennial of Franc Rozman, who was nicknamed “Stane.” He was a general in the leadership of the Yugoslav Partisan army and a national hero of Slovenia.

He died in 1944 in the struggle for liberation from Axis occupation and the creation of a Communist Yugoslav state.

A stylized outline-portrait of Rozman appears on the coin’s national side, with a star outline inset over his torso. Rozman’s name, nickname, the issue date year 2011 and the year dates of his birth and death, 1911 and 1944, also appear on the national side.

One million coins are to be released in March. ¦