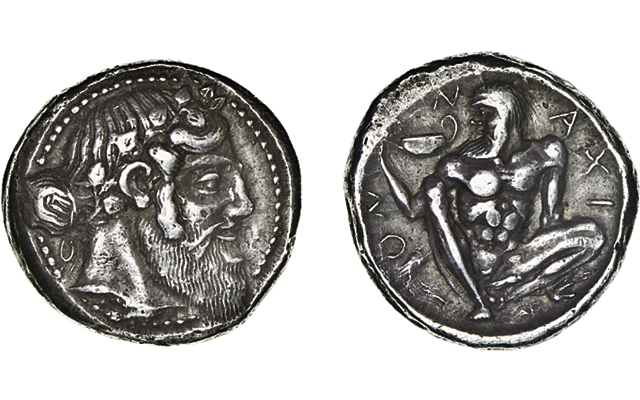 An ancient coin that may have marked the homecoming of an island of Greeks led all bidding during Morton & Eden’s June 10 and 11 auction.

The entire population of Naxos, an island in the Aegean Sea, was allowed to return to their homeland 15 years after being forced out in 476 B.C. They had been moved to Leontini (also called Lentini), a town in Syracuse, Sicily, by Hieron of Syracuse.

This coin, which the auction firm calls “one of the most celebrated coins from antiquity and a masterpiece of engraving,” is believed to have been from a special issue marking the 461 B.C. return.

The symbols on the coin — Dionysos and Silenus — are both related to drinking, wine and drunkenness, and the return home was certainly a cause to which the Greeks could raise a glass.

All examples known of this coin are from a single pair of dies, and this example has a provenance dating to “a European collection formed in the 1920s,” according to the auction house.

The coin has minor tooling in the obverse field and is graded by the firm as Very Fine.

The firm is now accepting consignments for its next auction of ancient, British, and world coins, historical medals, plaquettes and paper money to be held in November.