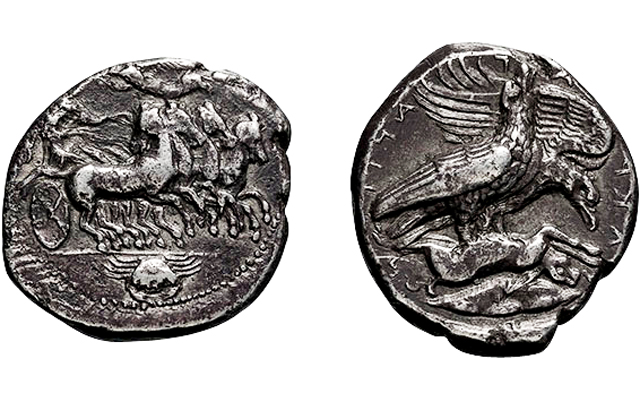 A silver tetradrachm of Akragas in Sicily, issued circa 408 to 406 B.C., was once part of the Nelson Bunker Hunt Collection. It is estimated to sell for $125,000 in a Jan. 11 auction in New York City.

Though the tetradrachms of Akragas in Sicily in ancient Greece don’t have the cachet and price of the larger, heavier decadrachms from Akragas, that doesn’t mean they lack for interest.

The tetradrachm — which is struck to a weight equal to four drachmae — was once part of the famed Nelson Bunker Hunt Collection, which was sold in five auctions conducted by Sotheby’s in the early 1990s.

The obverse of the coin shows a quadriga (four-horse chariot) galloping right, with the female charioteer crowned by Nike.

The reverse depicts two eagles devouring a hare while standing on rocks.

The design type was borrowed from similar designs issued by rival Syracuse, but Akragas issued this style for only a short time, not before 409 to 408 B.C. and maybe only in 407 to 406 B.C.

Though they adopted a foreign design, the die angravers in Akragas added their own touches. For instance, the first horse turns its head backward, which is unique in Sicilian numismatics to this series, the auction house said.

“These coins are great works of art,” according to the cataloger. “Late Akragantine tetradrachms are therefore highly appreciated and very much sought after by serious collectors.”

The tetradrachm is “an unquestionably genuine example of one of the most sought after Greek coins,” the catalog reports.

It does have some light corrosion on the obverse, and the auction house grades it as Very Fine to About Extremely Fine.

For more information about the lot, visit the Gemini Numismatic Auctions sale website.