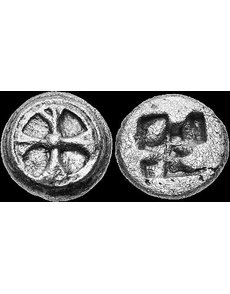 The earliest coinage of Athens, called wappenmünzen (or “heraldic coinage”), had many designs. This tiny silver obol (0.65 gram), perhaps of circa 515 to 510 B.C., has a wheel and an incuse square. 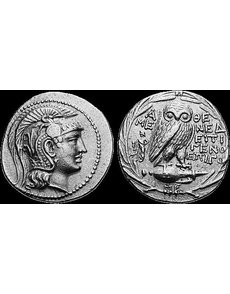 Athenian “new style” tetradrachms were perhaps introduced in about 165 B.C. The style is fresh and the owl — now standing on an amphora — is shown within a laurel wreath. 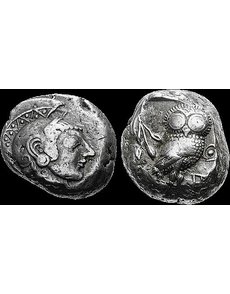 This silver tetradrachm is among the earliest of the Athenian “Owls,” perhaps dating to circa 500 to 480 B.C. It pairs the helmeted head of Athena with a standing figure of her owl. 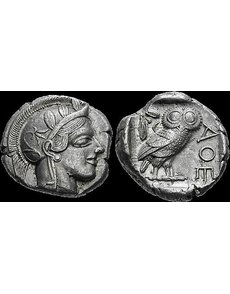 Tetradrachms of Athens were familiar to merchants from Sicily to India. This one, struck between circa 440 and 404 B.C., belongs to the most substantial period of striking at Athens.

Athens is the most famous of all Greek cities. As a cultural, political, economic and military force it had no equal in the Greek world before the rise of the Macedonian kings in the fourth century B.C.

Its legacy as a cultural center lingered well into the Roman era, long after Athens had lost its importance in most other respects, and even to this day the study of ancient Greece is firmly anchored in the study of Athens.

Coinage is one of the enduring testaments to the might of Athens, for it was issued there in great quantities for more than seven centuries. During the peak eras, it is estimated that hundreds of millions of silver tetradrachms (4-drachm coins) were struck from silver mined at nearby Laurion.

Hoard evidence shows that Athenian tetradrachms circulated throughout the Mediterranean world and well beyond, routinely reaching Egypt, Arabia and India. They were so popular that copies of Athenian types, often meant to pass as the real thing, were struck in a variety of far-flung places.

The earliest coinage of Athens is still somewhat mysterious as none have inscriptions, and their precise dating is unclear. Since these coins have a variety of designs, they have been dubbed wappenmünzen, meaning “heraldic coinage.” Unlike the obverse, the reverse of these coins had no design, only the impression of a utilitarian punch.

The wappenmünzen series appears to have begun in about 545 B.C. with the standard denomination being a didrachm (2-drachm piece) weighing about 8.6 grams. This was conveniently equal to the principal coin (a stater) of nearby Corinth. The didrachm may have been the only denomination struck in the earliest phase of the wappenmünzen, after which it seems to have been replaced by tetradrachms and fractions with designs on both their obverse and reverse.

The most familiar coins of Athens, however, are the “Owl” tetradrachms, which closely followed the wappenmünzen issues. Their date of introduction is uncertain, with current theory being that they were introduced by Hippias (tyrant of Athens from 527 to 510 B.C.) sometime between 525 and 510 B.C., with circa 515 B.C. being a likely candidate.

Instead of having several major designs, the Owl tetradrachms had only one combination: the helmeted head of Athena on the obverse and a standing owl on the reverse. The style of engraving and the details of the design evolved over more than four centuries, allowing collectors to observe quite powerfully the changes in Greek art and coin production within a single series of coins.

During the earliest period of Owl production (circa 515 to 465 B.C.), the stiff and schematic style of art evolved into something approaching naturalistic. Many features of Archaic Greek art, though, remained, including Athena’s curious smile.

A notable evolution occurred in about 465 B.C., when coins of a “transitional” style were introduced. They were struck from wonderfully engraved dies, which benefited from an obvious improvement in the technical aspects of coin production. This transition to a higher quality was brief, lasting perhaps five years.

They were followed by the largest issues of Owl tetradrachms, struck from about 460 to 404 B.C. The earliest coins of this period are of excellent style with carefully engraved dies, making them some of the most appealing “Owls” ever produced.

Over time, however, the freshness of Athenian engraving gave way to a bland stylization.

The issues from at least the 420s B.C. until the surrender of Athens in the Peloponnesian War (431 to 404 B.C.) often are uninspired creations. In this period the line between official issues and contemporary imitations can be blurry.

When Athens was cut off from its mines at Laurion in about 407 or 406 B.C., near the end of the Peloponnesian War, its production of silver coins ceased. Its people resorted to issuing silver-plated coins and gold coins as an emergency measure. The gold was taken from the bullion that coated the famous statues of Nike on the Acropolis.

From its humiliating surrender, however, Athens recovered admirably, even if it never reclaimed its former glory. The city’s next major coinage, which commenced in about 394 B.C., lasted for about a century. It consisted mainly of silver tetradrachms struck to the traditionally high standards of weight and purity.

However, the engraving was simplistic and shallow, and often bordered on cartoonish. Athena’s eye was no longer facing, but shown in profile, and the strikes were especially crude. Finding an attractive example of this coinage is a real challenge.

Next came a period of transition in the late third to the early second century, during which Athens produced very few silver tetradrachms. All of the known examples are of odd style and most (if not all) have symbols in their fields — something uncharacteristic of earlier issues. These coins are rare and unusual, and some may be imitations.

The final type of Athenian tetradrachm — the so-called “new style” series — is large and impressive, and is markedly different in appearance than anything issued at Athens before. They are struck on comparatively thin, broad planchets, and the types are greatly modified — one might even say “modernized.”

On the new style coinage, Athena’s helmet has three crests and is ornamented with a pouncing griffin and a racing chariot. The reverse shows a rotund owl with well-articulated feathers that faces the viewer and stands on an overturned amphora. These design elements are all contained within a laurel wreath — hence the colloquial name of this coinage, stephanophorus, meaning “wreath bearer.”

The reverse field is filled with a variety of symbols, monograms and inscriptions dedicated to Athens and to the officials responsible for issuing coinage. Many of these coins were dated right down to the month of issue.

Unfortunately, the precise dating of this large and intricate series is much-debated. The “internal” chronology (the sequence of issues) was well established in a study by Margaret Thompson published in 1954. However, the “absolute” chronology — when the series started and when it ended — is still being contemplated. Most authorities now believe it commenced in about 165 B.C. and continued down to the late 40s B.C. ¦