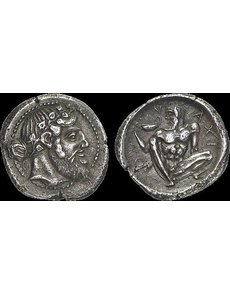 A silver tetradrachm of Naxos, Sicily, apparently established a new record price for a silver Greek coin sold at auction, realizing $994,500 with buyer’s fee Jan. 4 in the Prospero Collection auction.

A silver tetradrachm of Naxos, Sicily, in ancient Greece, believed to have been engraved by the “Aitna Master,” was one of the highlights during the Jan. 4 auction of the Prospero Collection by the New York Sale.

The silver tetradrachm of Naxos, “one of the great classics of the ancient Greek series,” according to the auction firm, is in About Extremely Fine condition and realized $994,500 including the 17 percent buyer’s fee, but it was not even the marquee lot selling in the auction.

That distinction is held by the unique circa 350 to 300 B.C. gold stater of Pantikapaion, a city on the Black Sea in ancient Greece. The coin sold for $3.8 million, establishing a new record price for an ancient Greek coin (Coin World, Jan. 23 issue).

The Prospero Collection was formed over several decades by a collector with a passion for the arts and a taste for “beautiful and famous ancient Greek coins” according to the partner firms conducting the auction, and was filled with numerous “finest known” and “unique” pieces.

All successful bids are subject to a 17 percent buyer’s fee, which is reflected in the totals here.

Greece, Sicily, Syracuse, circa 466 to 465 B.C. silver decadrachm, end of Deinomenid Tyranny and beginning of the Second Democracy, 42.65 grams, by the Demareteion Master, “one of the most spectacular of fifth century Greek coins,” VF, $292,500.

Greece, Sicily, Syracuse, circa 466 to 465 B.C. silver tetradrachm, end of Deinomenid Tyranny and beginning of the Second Democracy, 17.09 grams, by the Demareteion Master, “a few pits towards obverse edge, lightly toned,” VF, $40,950.

Greece, kingdom of Paeonia, Bastareos, circa 400 B.C. silver tetradrachm, 13.14 grams, “there is no other evidence for the existence of Bastareos apart from these coins,” “perhaps the only example available in private hands,” VF, $222,300.

Greece, Attica, Athens, circa 467 to 465 B.C. silver decadrachm, 42.56 grams, “only two other examples known from this pair of dies, of the highest numismatic and historical importance and a magnificent example of ancient art,” “a few light marks, otherwise About Extremely Fine,” $409,500.