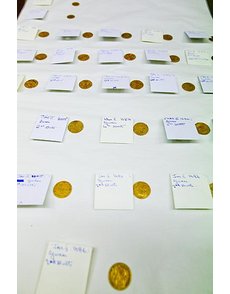 A hoard of 81 gold guineas and half guineas from about 1660 to 1702 was discovered during renovations at a pub in Tipperary, Ireland. Some of the coins have been examined and classified by the National Museum of Ireland in Dublin.

Image by Maxwell Photography, courtesy of the National Museum of Ireland.

One of the “most significant finds of 17th century gold coins” ever found in Ireland was recently discovered during reconstruction at a pub in Tipperary.

The hoard of 81 gold coins was announced Jan. 29 by the National Museum of Ireland, which has custody of the coins as hoard contents are examined. The hoard was discovered Jan. 14 and consists of gold coins, mostly guineas but some half guineas. The coins were issued during the reigns of Charles II, James II, William and Mary, and William III, meaning the coins date from about 1660 to 1702.

The coins were apparently concealed in soil under the pub’s floorboards and were spotted by one of the builders while carrying out work, according to a statement from the museum. The coins are reported to have been found “in a line together” and may have been at first wrapped and held together by some material that did not survive.

The museum is not answering questions about the hoard and its discovery, pointing to a press release about the matter. Irish media reported that the spot where the coins were found was under an old pub building that had been damaged by fire. The coins were turned over to local authorities before being sent to the national museum in Dublin.

The guinea is a British gold coin minted between 1663 and 1814. The coins were in four denominations (half-, 1-, 2- and 5-guinea pieces). They are called guineas because the gold used to make some of them came from West Africa.

Seamus Lynam, acting director of the National Museum, said no comparable 17th century hoard of gold coins has been found in Ireland since the discovery of around 100 gold and silver coins in Portarlington, County Laois, in 1947, according to a statement from the South Tipperary County Museum.

Marie McMahon, curator at the South Tipperary County Museum, told the Belfast Telegraph that the coins in the 2013 discovery are mostly in “fantastic condition,” with a few buckled or tarnished. “They’d be incredibly valuable but legally we would not be allowed to discuss that,” she told the newspaper.