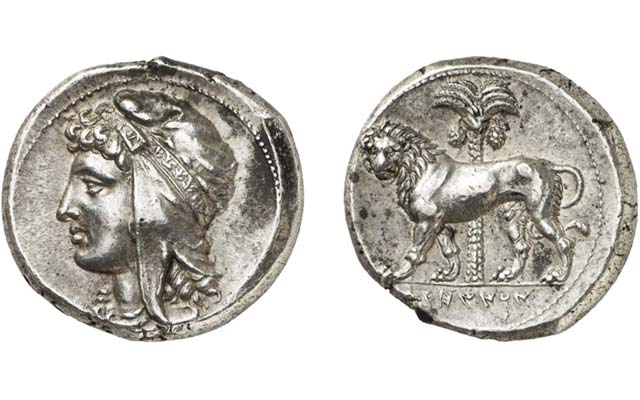 The obverse shows a female wearing a tiara. Experts suggest the female is one of several figures, including possibly Libya, Elissa, Venus, Aphrodite, or Artemis. Others describe her as a Carthaginian goddess, representing the lands over which Carthage ruled (which included Sicily).

The coin was reportedly struck by a mobile mint during a time of war, and likely was issued to provide financial assistance to Agathocles’ allies, according to the auction house.

A lion and palm tree appear on the reverse of the coin.

The coin was graded as Extremely Fine by the auction house.

Künker offered four different auctions across five days, from March 9 to 13, which realized a total hammer price of some €9.6 million (about $10.3 million dollars U.S.), according to the firm.

To learn about all of the items sold in those auctions, visit the firm’s website.