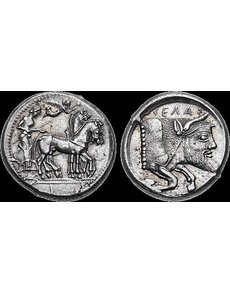 Tetradrachm of Gela from circa 480 to 470 B.C. shows a charioteer driving a four-horse chariot (quadriga) and the forepart of a river-god who takes the form of a man-headed bull. 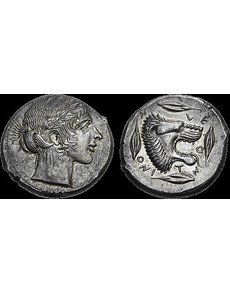 An effeminate portrait of the god Apollo and a fearsome head of a roaring lion are the standard types of the silver tetradrachms of Leontini in the mid-fifth century B.C. 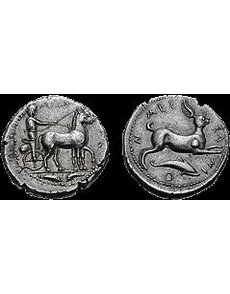 From the heyday of coinage at Messana, in the last quarter of fifth century B.C., this tetradrachm shows the city nymph guiding a chariot pulled by two mules, and a leaping hare. 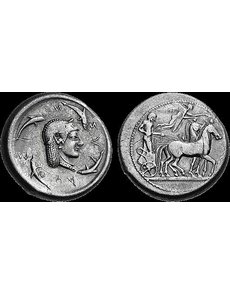 This fine example of the iconic Syracuse tetradrachm is thought to have been struck circa 485 to 480 B.C., during the Archaic period of Greek art.

For centuries collectors have prized the coins of ancient Sicily for their fine artistry, and with the publication of many academic studies in the last century, they are now equally appreciated for their historical value.

Many iconic and influential coin designs originated at Sicilian mints from the sixth through the third centuries B.C. Since a complete discussion of Sicilian coinage is not possible in so brief a survey, we’ll focus on the silver tetradrachms — large silver coins that were suitable for regional and international trade. They were struck at more than a dozen mints on the island and are the best recognized and most popular coins of ancient Sicily.

The obvious place to start is with the island’s preeminent ancient city, Syracuse. Its earliest tetradrachms, commencing in about 520 or 510 B.C., feature a slow chariot on the obverse and an incuse punch on the reverse. Over time, the utilitarian reverse began to incorporate a design, the head of a female deity usually described as Arethusa. Eventually she was adopted as the design of the entire reverse.

This evolutionary process caused the head to become the reverse design — something unusual in comparison with most ancient (and modern) coinages. A few minor exceptions aside, it was not until the reign of King Agathocles (317 to 289 B.C.) that the head was moved to the obverse of Syracusan tetradrachms.

The chariot/female head design remained the principal type of Syracusan tetradrachms for perhaps two centuries, yet its style and composition evolved so greatly that there is nothing predictable or mundane about these coins. They have been very carefully studied, and the most advanced collectors seek out as many different versions as possible, often collecting them by die.

Though Syracuse was the most prolific and influential mint of Sicily, some other cities had issued coins earlier. Five of the earliest Sicilian mints were Selinus, Himera, Zancle, Naxos and Acragas. The first two may have begun producing coins as early as 550 B.C. (and certainly had by circa 530 B.C.), and the last three started between circa 525 and 520 B.C. All of these coins, however, were lighter than tetradrachms, and thus fall beyond the scope of our survey.

Beyond Syracuse, eight other cities struck civic tetradrachms in quantity — half of the cities strewn along the eastern shore, the other four on the southern shore.

We may add to this tally any mints that struck tetradrachms for the Carthaginians during their wars with the Greeks in Sicily in the fifth and fourth centuries B.C. Collectively known as “Siculo-Punic” issues, their mint-cities have not been identified with certainty.

The eastern shore of Sicily was home to Messana, Naxos, Catana and Leontini, all significant issuers of tetradrachms. The first tetradrachms of Messana (formerly the city of Zancle) bore a lion’s scalp and a calf’s head, but for most of the fifth century B.C. its tetradrachms showed a leaping hare and a chariot drawn by two mules. It issued no tetradrachms after being sacked by the Carthaginians in 397 B.C.

Naxos struck three main issues of tetradrachms between circa 460 B.C. and circa 405 B.C., each being of excellent style, but limited in size. They show on their obverse the head of the god Dionysus, and on their reverse Silenus, one of Dionysus’ divine companions, in drunken revelry.

About midway between Naxos and Syracuse was Catana, which struck large quantities of tetradrachms from about 465 to 400 B.C. Except for its earliest type, which shows a bull on its obverse and a standing Nike on its reverse, most show a chariot scene and the head of the god Apollo.

Equally beautiful tetradrachms were struck in large quantities at nearby Leontini. It also had two major types: the earliest pieces (circa 475 to 460 B.C.) show a chariot and a lion’s head, and most of its later issues (circa 460 to 420 B.C.) show a lion’s head paired with the head of Apollo.

On the southern shore of Sicily, four other important cities produced meaningful issues of tetradrachms: Camarina, Gela, Acragas and Selinus. Camarina was active in this regard from circa 425 to 405 B.C., striking issues with a chariot scene and the head of Heracles (Hercules). These coins are particularly artful, and show either a young, clean-shaven Heracles or an older version of the hero with a beard.

Even more impressive are the tetradrachms of Gela, struck from about 480 to 405 B.C. Most show on their obverse a chariot and on their reverse a man-headed bull. Their ever-evolving art style is so captivating that it would be easy to specialize in them for a lifetime.

Just as recognizable are the tetradrachms of Acragas, another of Sicily’s leading cities. It consistently issued large quantities of tetradrachms from circa 465 B.C. until it was destroyed by the Carthaginians in 406 B.C. Their iconic types show a standing eagle and a crab seen from above.

The last important issuer of tetradrachms on the southern shore was Selinus, which produced some especially beautiful coins and employed creative designs from about 465 to 410 B.C. The obverses show a chariot driven by the sibling gods Artemis and Apollo, though occasionally by Nike. The reverse is more complex, showing the local river-god Selinus offering a sacrifice between two decorated altars.

Beyond its silver tetradrachms, Sicily is an extraordinary region for specialists in any kind of ancient coinage, for some exceptional gold issues, and a very broad range of smaller silver coins and copper coins make the collecting possibilities virtually limitless. ¦