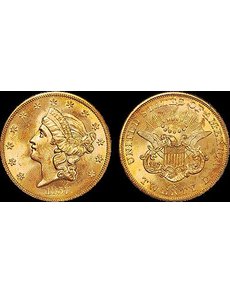 In the past decade, the rare coin market has embraced United States coins recovered from shipwrecks, in large part because of major third-party grading services’ efforts to conserve and grade these coins.

When shipwreck coins retain their original surface character and display no visual evidence of their time underwater, they may be graded using a 70-point numerical grading standard. Gold is more inert than silver or copper and as such, gold shipwreck coins may often be fully conserved. Silver coins are more prone to show evidence to saltwater exposure and the surfaces may show an etched look.

Numismatic Guaranty Corp. uses a “Shipwreck Effect” designation that, according to NGC, allows it to “accurately describe the condition of a coin by noting surface disturbance that results from its preservation history.” To receive this designation, coins must be recovered in a way that preserves the history of the wreck and must be conserved to ensure stability. Many of these coins receive a wear or details grade.

Among the most commonly traded “Shipwreck Effect” coins in the marketplace are New Orleans mint Seated Liberty half dollars from the SS Republic that sank in 1865. Examples simply graded “Shipwreck Effect” but with the look of a bright About Uncirculated coin have traded for between $250 and $500 at auction recently, with premiums being attached to coins that retain their handsome wooden presentation cases that accompanied the coins when they were originally marketed.

Gold coins found in shipwrecks often can be restored to like-new condition, and finds have the potential to completely rewrite the hobby’s understanding of rarity within a type. For example, the discovery of the SS Central America — which sank in 1857 and was discovered in the mid-1980s — included the recovery of more than 5,000 1857-S Coronet $20 double eagles in grades ranging from Extremely Fine to Mint State 67. The coins were conserved, encapsulated by Professional Coin Grading Service, and were marketed to collectors at the start of the new millennium.

The discovery of so many high-grade examples of Coronet, No Motto double eagles exploded population reports and took pressure off of the existing supply, while the work of coin marketers created demand for the coins. Buyers today place a modest premium on SS Central America double eagles in their original gold foil PCGS holders, and many collectors want examples with their original boxes and packaging. ¦