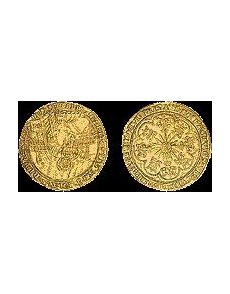 A rare Ship gold ryal of Queen Mary, one of five examples offered at auction in 60 years, leads Spink’s Dec. 13 auction, which is dominated by English gold but offers a range of other items as well.

Highlighting the 497-lot auction is the mdliii (1553) Ship gold ryal of Queen Mary issued during her individual reign. The queen appears “plainly and solemnly dressed, holding a sword and shield and standing in an old fashioned high castled galleon” on the coin, according to the auction house, representing the “militant piety of a monarchy defending the old religious order.”

Ship ryals are rare, with only five examples of the coin issued under Queen Mary appearing at auction in the last 60 years, according to Spink.

This example is struck on “an unusually full round” planchet, according to the catalog. It has an “attractive portrait, light crease, [and] a small striking crack by tassle in centre on obverse,” but is otherwise in Good Very Fine condition.

Spink traces the coin’s provenance to three auctions, the earliest dating back to 1900.

The auction is scheduled to be conducted in London.

All successful bids in the Spink auction will be subject to a 20 percent buyer’s fee.

The complete catalog may be viewed or downloaded as a PDF from a link at the firm’s website, www.spink.com/auctions/pdf/11024.pdf. The lots also may be browsed online by accessing the auction through www.spink.com/asp/cataloguesearch.asp.

England, Mercia, Queen Cynethryth (wife of Mercia), circa 757 to 796 silver penny, Canterbury Mint, “the pennies of Queen Cynethryth are the only Anglo-Saxon coins known to have been struck for a woman,” Lot 12, Good Very Fine.

England, East Anglia, circa 796 to 798/800 silver penny, King Eadwald, probably from the mint at Ipswich, “only the sixth example recorded for this issue, of these, three coins are known all from the same dies, this coin is from different dies,” “Eadwald is only known from his coinage,” Lot 70, “full details otherwise Good Very Fine.”

England, Eadgar, circa 959 to 975 silver halfpenny, “the finest known example of an Eadgar halfpenny,” Chichester, “this full example is only the second to have been recorded [for the mint],” Boiga of Wilton the moneyer, Lot 72, Extremely Fine.