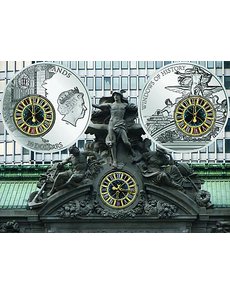 The famous clock on the facade at Grand Central Terminal is the centerpiece of the 2013 Windows of History silver $10 coin from the Cook Islands. The coin is the second issue in the annual series.

The next stop for Cook Islands’ annual Windows of History series is Grand Central Terminal in New York City.

Often called Grand Central Station, the terminal is one of New York City’s most famous landmarks. Built by and named for the New York Central Railroad in the heyday of American long-distance passenger rail travel, it is the largest train station in the world by number of platforms: 44, with 67 tracks along them.

Grand Central Depot operated at the site from 1871, before being replaced by Grand Central Station. In the early 1900s, a new station was needed and so the current terminal, built in the French Beaux-Arts style, opened on Feb. 2, 1913.

Grand Central Terminal is famous for two timepieces: the four-faced clock that adorns the information booth inside, and the exterior clock on the 42nd Street facade that is constructed of Tiffany glass. The latter is the world’s largest example of Tiffany glass and is surrounded by three sculptures designed by French sculptor Jules-Felix Coutan.

Mercury, god of commerce, is at the center of the sculpture, flanked by Minerva, Roman goddess of wisdom, and Hercules, the Roman name of the son of Zeus.

That glass clock highlights the latest entry in the Windows of History series of Prooflike $10 coins from Cook Islands. The series, coordinated by European distributor Allcollect, began in 2012 by featuring the Titanic.

The glass clock of Grand Central Terminal is visible from both sides, with stained glass at the center of the clock.

The sculptures surround the clock on the reverse, while the obverse shows a partial interior view of the chandeliers on the station’s lower concourse, as well as the mandatory effigy of Queen Elizabeth II, designed by Ian Rank-Broadley.

The Prooflike .925 fine silver coin weighs 50 grams and measures 50 millimeters in diameter. It has a mintage limit of 1,913 pieces.

To order, telephone Downies toll free at 877-897-7696, email it at downiesUSA@downies.com or visit www.downies.com, the firm’s website. ¦