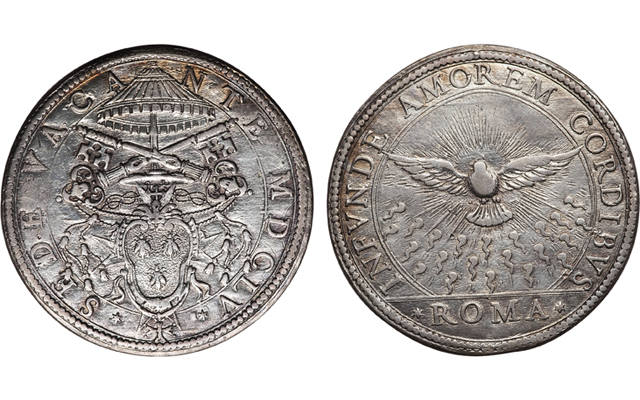 A 1655 silver piastra of the Vatican was issued after the death of Pope Innocent X and before the selection of Alexander VII as the next pope.

When one pope dies or, in the rare case of Pope Benedict XVI, steps down, the period before the selection of a new pope is called the “sede vacante.”

The Latin term sede vacante translates to “the seat is vacant.”

An example of a 1655 Sede Vacante piastra was recently sold at an auction by Heritage Auctions of part of the Dr. Thomas F. Fitzgerald Collection of Papal Coins, Medals and Paper Money. The sale closed May 31 and the Extremely Fine coin (with mount removed) realized $646.25, including the 17.5 percent buyer’s fee.

The coin was struck at the Rome Mint, in the name of Antonio Barberini, the cardinal serving as camerlengo, the papal secretary of state, who is in charge of basic affairs following a Pope’s death. The sede vacante period marked by this coin began Jan. 7, 1655, and concluded on April 7, 1655.

The obverse shows crossed keys below a canopy and above a shield, recalling Jesus’ words to Peter — “I will give you the keys of the kingdom.” The reverse shows “a radiant dove above a rain of flames,” according to the catalog description.