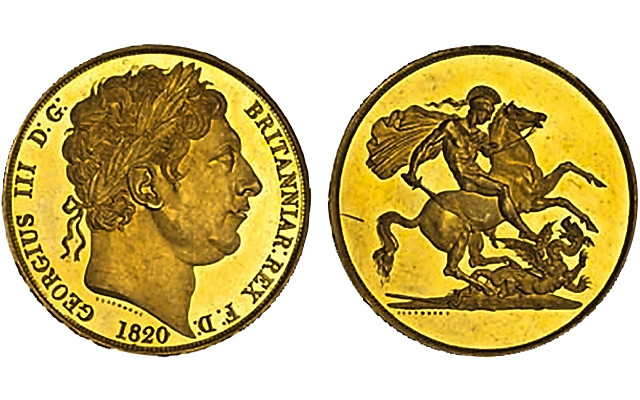 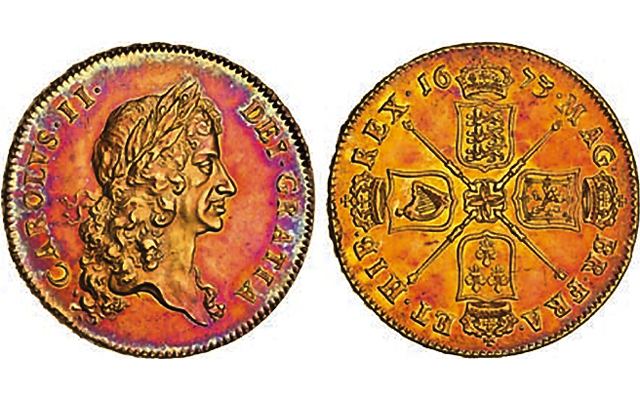 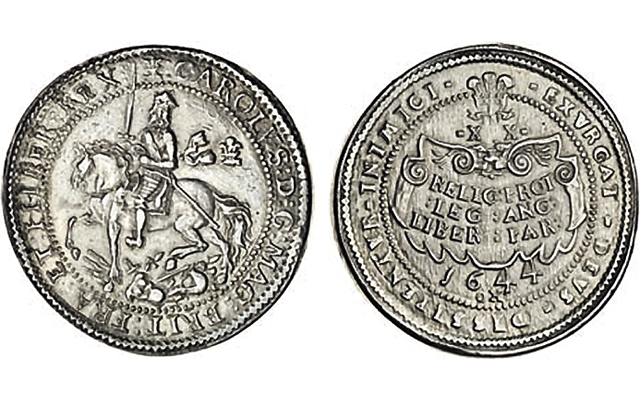 During the English Civil War, Charles I had to flee London and eventually established camp — and a mint — in Oxford, where this rare 1644 silver £1 coin was struck as a propaganda piece. 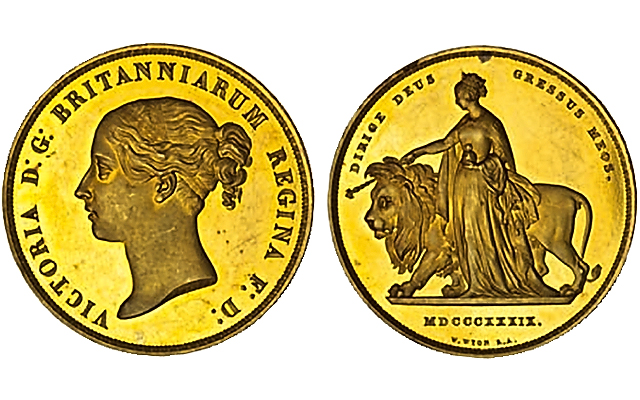 The final part of a collection decades in the making has finally been sold.

Spink on May 14 auctioned the second half of the Slaney Collection, which was off the market for more than 50 years before the first part was auctioned in 2003.

The 2003 auction established mutiple record prices, and the 2015 sale was anticipated to have done the same

See: How special was the first part of the Slaney Collection auction?

The issue marked the debut of the £5 denomination.

The coin has robust, colorful toning and a provenance dating back to 1887, when H. Montagu purchased it. Besides being in the famed Montagu Collection, the piece was once owned by J.G. Murdoch, whose collection is also one of the most notable of the early 20th century.

The auction house noted that it has “a few light hairlines under a remarkable deep rich red tone,” and is Extremely Fine “with lustrous original surfaces.”

Two other highlights of note are among the famous issues of British coinage.

The whopping piece (it weighs 118.92 grams) was once part of the Virgil Brand and Montagu collections. It was sold for £36 in Sotheby’s 1896 sale of the third part of the Montagu Collection, a large sum for its day.

Charles I had retreated from London to Oxford and erected a mint there. He needed money desperately to pay his troops fighting the Parliamentary forces, resulting in these very large £1coins.

The obverse shows the king on horseback trampling arms and armor beneath him, and the reverse depicts the famous declaration cartouche that symbolizes the issues behind the English Civil War. The king protested that he was defending the liberties and the true religion of the country, and acting in the name of liberty in Parliament. Of course, these assertions directly contradict his enemies, making this coin a fantastic piece of propaganda.

The other famed rarity is the 1839 Una and the Lion gold £5 pattern of Queen Victoria.

The coin shows Una from Spencer’s Faery Queen as Queen Victoria with crown and sceptre, leading the lion (representing Britain), who is tamed by her beauty and purity. It was a radical idea to represent the monarch as a fairy-tale character on the country’s coinage, so it remained a pattern piece and the George and the Dragon design was used instead.

Spink sold the first half of the Slaney Collection in May 2003. Reporting for Coin World, London correspondent John Andrew wrote at the time that the auction was the moment that “exceptional English coins entered a new watershed of prices.”

“Collectors have never seen so many auction records broken at an auction devoted to English material. ... This will be remembered as one of the finest sales of English coins for many years,” he wrote.

"Very little is known of the man who formed the collection. He was an extremely private individual. Not only did he never attend an auction, he never attended the offices of any of the London dealers with whom he dealt."

Andrew added about the 2003 auction: "The Slaney Collection is an English type collection embracing specimens from Tudor England right through to the 20th century. A collector who only wanted the very best examples formed it in the 1940s and 1950s. This was a period when some of the finest collections formed in the first half of the 20th century were being dispersed. Slaney had the pick of the best and money appeared to be no object.

"The collection is noted for its quality, regardless of rarity and price, and many pieces in the collection have impressive provenances going back into the 19th century."

To learn more about the 2015 auction, visit the auction house’s website.