Say good night to Byzantine empress Irene: On the Block 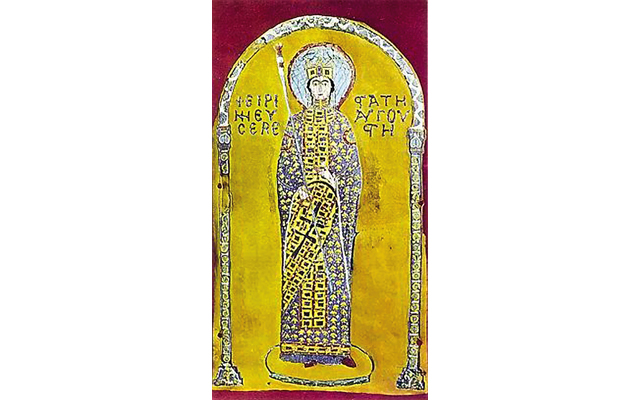 Irene of Athens, the Byzantine empress from 797 to 802, appears on a 10th century image in Venice. 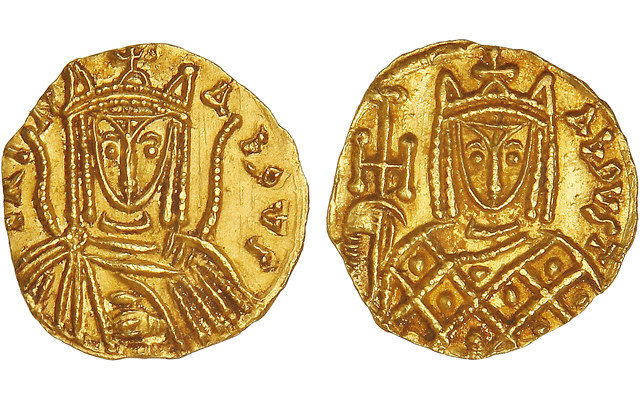 When the Byzantine Empire  had its first sole female ruler, her reign was short-lived and marred by controversy.

A gold solidus in Soler y Llach’s July 2 auction in Madrid captures the story of that contested period in the eastern Roman lands.

Irene of Athens came to the throne in 797, after her supporters captured and imprisoned her son and co-regent Constantine VI.

According to Byzantine Coins and their Values by David R. Sear, her reign marked a significant geopolitical milestone.

“For the first time in the history of the Empire the throne was occupied by a woman exercising power in her own right, and the experiment was a dismal failure,” he wrote. “She attempted to buy popularity by making generous gifts and reducing taxation, but this simply impoverished the State and further weakened the resistance the Byzantines were able to offer to foreign aggressors.”

Irene was removed during a palace revolution in 802 and was exiled, dying on the island of Lesbos soon after.

Two obverse design styles of solidii coins were struck at Syracuse during Irene’s reign, but both types present the empress on both sides, a radical departure from the style of solidii in the Isaurian Dynasty.

She is crowned in both obverse scenes, but on the type represented by the coin in the Soler y Llach auction, she wears a loros, an embellished embroidered scarf, and a chlamys, a cloak, and holds an akakia, a ceremonial cylindrical roll of purple silk containing dust, symbol of human mortality.

The other type shows the empress holding a globe and crown on the obverse.

The reverse, common to both types, shows Irene holding a cross potent.

The design offered in the July 2 auction is cataloged as Sear 1601 in the book by Sear, where it is described as “extremely rare.”

The coin in the auction weighs 8.3 grams and features high relief and original luster, according to the auction firm, which grades the piece as “Extremely Fine.”