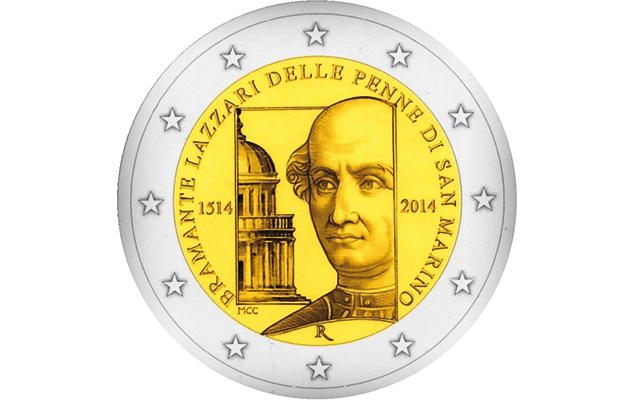 San Marino on June 23 is issuing a 2-euro coin to mark the 500th anniversary of the death of architect Donato Bramante.

Image courtesy of the AASFN.

San Marino’s first 2-euro coin for 2014 celebrates architect Donato Bramante, who was born in Italy in 1444.

The coin marks the 500th anniversary of Bramante’s death. He introduced Renaissance architecture to Milan and the High Renaissance style to Rome, where his plan for St. Peter’s Basilica formed the basis of design executed by Michelangelo.

Part of a bust of Bramante, as he appears in a fresco of Raphael, appears along with a portion of St. Peter’s Basilica on the obverse of the coin, with various inscriptions, all surrounded by the 12 stars indicating the European Union.

The common reverse carries a map of the European Union and was designed by Luc Luycx.

The coin has a copper-nickel ring and a nickel-brass core. The coin weighs 8.5 grams and measures 25.75 millimeters in diameter.

It is available only in special coin card packaging, with a mintage limit of 110,000 pieces.