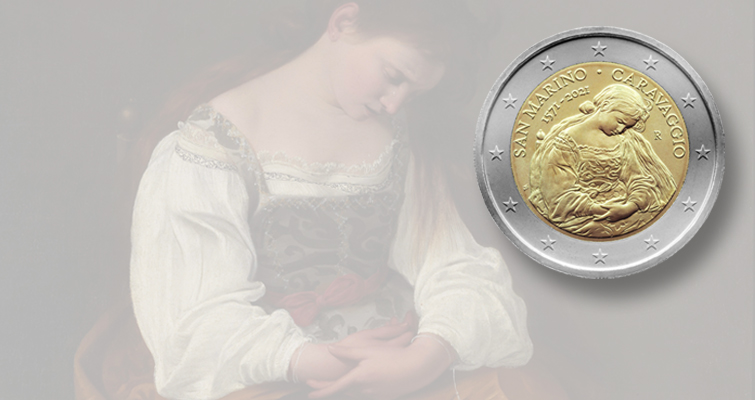 The coin, released March 1, marks the 450th anniversary of his birth.

Michelangelo Merisi, sometimes referred to as “the other Michelango,” was born in 1571 in Caravaggio, a village near Milan that would eventually be used to identify him (differentiating him from Michelango Buonarroti, the artist best known by his first name)

A troubled and afflicted painter, Caravaggio was a genius who profoundly revolutionized the history of art, introducing the study of the truth and the violent use of light as a metaphor of God’s grace.

The obverse of the €2 coin shows the penitent Magdalene, taken from the work of the same name kept at the prestigious Galleria Doria Pamphilj in Rome.

“Denied her previous frivolous life, the girl opens to divine grace with her hands gently laid on her lap and the jewels left on the ground next to the jar of unguent,” according to San Marino’s Uffizio Filatelico Numismatico Office of Philatelics and Numismatics. “The only ray of light that cuts across the canvas anticipates the dramatizations of the painter’s mature phase, which will influence all subsequent European painting.”

Silvia Petrassi designed the obverse, and the coin carries the common map-and-denomination design on the reverse.

In total, 54,000 Uncirculated examples of the new coin are being released, in special decorative packaging, but for collectors only. The coin retails for €16.50.

The ringed-bimetallic €2 coin has a copper-nickel core and copper-aluminum-nickel ring. The coin weighs 8.5 grams and measures 25.75 millimeters in diameter.

Each nation may issue up to two different “circulating” €2 commemorative designs annually, (although clearly, San Marino’s aren’t for circulation) with designs of their choosing, but not all nations issue the maximum number of designs.

To order, or for more information, visit the issuer’s website, www.ufn.sm/en/shop. 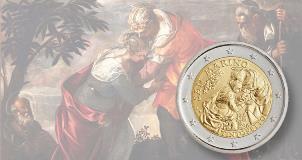 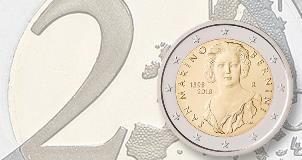 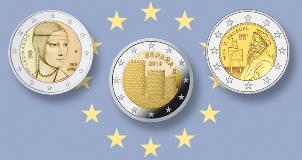