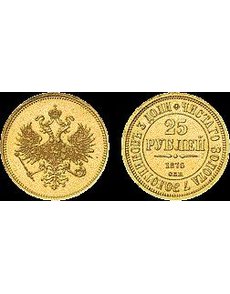 A Russian rarity, the 1876 gold 25-ruble coin of Alexander II, realized $210,600, including the buyer’s fee, making it one of the highlights in the New York Sale’s auction XXIX, which was held Jan. 5.

The coin, having a mintage of 100 pieces, is “the rarest and most elusive” of all large Russian gold coins, according to the partners conducting the auction. The coins were struck in honor of Grand Duke Vladimir Alexandrovich’s 30th birthday.

Graded and authenticated by Professional Coin Grading Service as Proof 58, it shows a “slight hint of handling” and had an estimate of $200,000.

The auction, one of three scheduled to be conducted during the New York International Numismatic Convention by the New York Sale entity, offered Russian coins, as well as Russian orders, decorations and medals. The partner firms for the New York Sale are Baldwin’s Auctions Ltd., Dmitry Markov Coins and Medals, and M & M Numismatics Ltd.