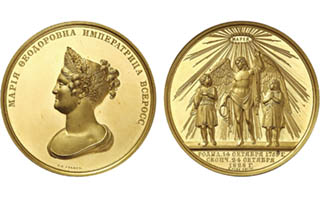 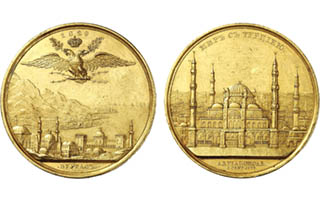 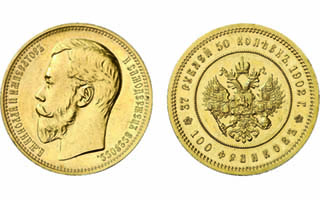 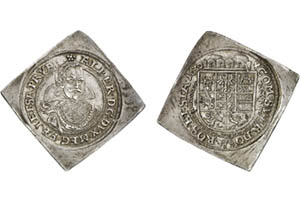 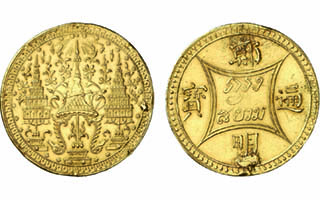 Berlin has become the ideal gathering place between East and West, bringing collectors of Russian coins together for auctions.

Fritz Rudolph Künker’s Feb. 6 auction, No. 244, was a prelude to the World Money Fair in Berlin that opened the following day. The auction realized total hammer prices realized of 7.4 million euros (about $10 million U.S.) in a single day.

The firm reports that strong attendance from dealers and collectors from Russia helped push prices upward.

Five rarities stand out from the 129 Russian pieces offered, including an “extremely rare” test strike of an 1801 rouble of Czar Alexander I struck at the St. Petersburg Mint. Described in the catalog as being slightly cleaned in Very Fine condition, the coin hammered for 100,000 euros against an estimate of 75,000 euros ($101,393 U.S.).

Hammer prices are reported here because the buyer’s fee for each coin varies, from 15 to 23 percent, depending on bidder location and lot type. In addition, some items are subject to a value-added tax; the VAT is added after the addition of the buyer’s fee to the hammer price.

Nicholas I issued a gold medal of 60-ducat weight to mark the death of his mother, Czarina Maria Feodorovna in 1828. The example sold in the auction is graded “About Mint State,” the firm reported.

The other medal, also issued under Nicholas I, was released in 1829. With a weight equal to 50 ducats, the medal celebrated the Treaty of Adrianople with Turkey. It is recorded as grading Very Fine to Extremely Fine.

One of the most notable Russian coins in the auction was the 1902 gold 37.5-ruble piece (100 franken) of Nicholas II.

Strong sales came in other areas of the auction as well, and not only for high-end material.

The 335 lots of German coins offered many a surprise, according to representatives of Künker, but no lot was more of a surprise than the 1630 half reichsthalerklippe bearing a portrait of Albrecht of Wallenstein, Duke of Friedland, minted in Sagan.

The “extremely rare, magnificently preserved piece” shows the well-known half-length portrait of the duke with the large collar; the portrait appears in the same way the controversial politician is depicted in contemporary prints.

One of the most stunning results came for a rare coin from Thailand.

The extremely rare coin was produced for the 60th birthday of King Mongkut.

A possible explanation for the stunning result might be the fact that many Thais consider King Mongkut as one of their most important historical figures. Prior to his accession to the throne, he lived 27 years as a monk. Bearing the name Rama IV, he opened up his country to Western knowledge. Although he had to assign many rights to the British, he was more successful in leading his country into the modern era than many other Asian rulers in the 19th century, according to the auction house.

His story has become well known today because of the biography of the English teacher Anna Leonowens, which was turned into the musical The King and I.

Complete auction results are available at the firm’s website, www.kuenker.de. For more information, telephone the firm at (011) 49 541 96 20 20 or email it at service@kuenker.de.