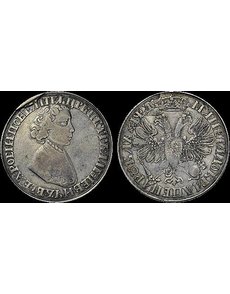 A 1704 Russian silver ruble from the Red Mint is one of two or three examples known. Once sold as a duplicate from the Hermitage Collection, the coin realized a hammer price of 750,000 Swiss francs (about $803,936 U.S.), or five times its estimate. 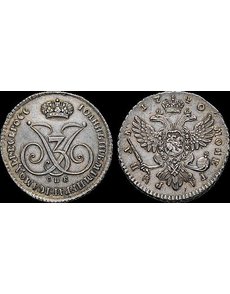 A rare 1740 silver pattern ruble for Ivan VI of Russia realized a hammer price of 3.6 million Swiss francs (about $3,858,890 U.S.), apparently establishing a new record price for a Russian coin sold at auction. 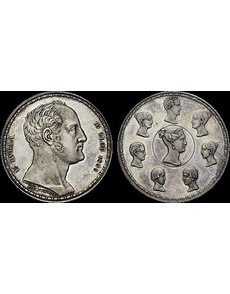 A rare 1740 silver pattern ruble for Ivan VI of Russia realized a hammer price of 3.6 million Swiss francs (about $3,858,890 U.S.) during the first part of a landmark auction of Russian coins.

The price apparently establishes a record for any Russian coin sold at auction.

The coin was sold Oct. 9, the first of four days of sale by Sincona AG for the first auction of coins from the Sincona Collection.

The collection is the largest Russian coin collection to be auctioned in nearly a century, according to the firm.

The buyer’s fees for the auction range from 15 to 20 percent, depending on bidding method, so the minimum price was pushed to 4.14 million Swiss francs (about $4,437,730 U.S.). A precise final bid could not be determined at press time.

The coin was struck for Ivan VI, the 2-month-old successor to Empress Anna, who had died in 1740. Though the empress’s grand-nephew never reigned, coinage and patterns were struck in his name. In 1741, Elizabeth (daughter of Peter I and cousin of Anna) seized control. Ivan (also known as Ioann Antonovich) was imprisoned; he lived for 23 years as a prisoner of the state before being executed after a botched rescue attempt.

According to Yale University’s website for its collection of coins and medals of Imperial Russia (www.library.yale.edu/slavic/coins/index.html), a government decree of Dec. 31, 1741, mandated the redemption of coins of Ivan VI for other coins at equal value, with the possession of Ivan’s coins after June 1745 illegal and holders subject to punishment.

The 1740 pattern is, according to Sincona AG, one of the two most valuable Russian silver coins.

An unknown number of the patterns were struck at the St. Petersburg Mint, of which researchers have identified five survivors.

The current whereabouts of each of the five pieces is unclear. At one time, two examples were in the collection of the Grand Duke George Mikhailovich; the Smithsonian Institution holds a portion of his collection today, and other portions of that collection were sold into the marketplace. Another pair of the patterns is provenanced to the Hermitage Museum in Russia, which holds a vast collection of Russian coinage. A fifth coin was once in the collection of Grand Duke Konstantin Nikolaevich. The auction house was unable to trace the piece just sold to any of these specific collections.

The firm provided a partial pedigree for the coin, and says the piece just auctioned was last sold publicly during the Nov. 7, 1968, Hess auction, where it realized 31,350 Swiss francs, including a 10 percent buyer’s fee. It was also sold in a Hess auction in 1924 and may have been the example sold in a 1919 Hess auction. Hess sold a different example in 1932.

At the auction just concluded, 10 to 15 bidders were interested when bidding for the pattern ruble began at 750,000 Swiss francs, according to Sincona CEO Jürg Richter. Within seconds, the price shot up to 2 million Swiss francs, Richter said. It took seven minutes to reach the final hammer price.

Sincona would not identify the buyer or the seller(s).

The Sincona Collection contains approximately 10,000 Russian silver and copper coins, making it the largest Russian coin collection to be sold since 1917, according to the firm.

The collection has little duplication, especially of date and die varieties, and was composed in the decades prior to 1970, according to the firm.

“The quality of the pieces often is astonishing. Aside from great rarities, the collection contains at least 300 Proof coins in perfect condition and with lustrous old patina,” according to an announcement from the firm.

Some of the more important coins may be traced to “old and prestigious collections” such as the duplicates of the Hermitage Museum and more. In addition, the firm notes, the collection contains a wide range of more common coins, often in exceptional quality.

I.V. Shiryakov, head of numismatics at the state historic museum in Moscow, was one of several experts to provide an essay for the sale catalog. In his essay, he wrote, “It is not an overstatement to describe this collection nowadays as unique.” He further described it as probably the last privately assembled collection “that has been collected in the spirit of classical (or museum) tradition, when coins were selected not for their rarity or beauty alone, but in order to achieve the maximum completeness of a collection.”

The collection was first formed in the 15 to 20 years following World War II, when those coins “that had been taken to foreign countries during the Russian Revolution and Civil War started to enter the market outside of Russia,” as the owners and heirs “began to treat them as only a source of personal prosperity,” Shiryakov wrote.

Taking interest in coins inside Russia during the period after World War II could lead to prison, he said, so only foreigners could form a collection of this scope.

The 1740 pattern ruble was one of many highlights from the collection to be offered.

While the previous record price for any Russian coin cannot be determined, just a handful of non-U.S. coins have sold at auction for more than $2 million.

Leading the way, aside from the top lot, was the 1704 silver ruble from the Red Mint that realized a hammer price of 750,000 Swiss francs (about $803,936 U.S.), or five times its estimate. One of two or three examples known to exist, it was last sold in a Nov. 27, 1972, mail-bid sale by Quality Sales Corp., of pieces from the Hermitage Collection. In addition to the Hermitage, the coin also is provenanced to the collection of Count Emmerich Hutten-Czapsky.

Another stunning result came with the sale of the famous 1836 Family Ruble of Nicholas I. The 1.5-ruble or 10-zloty coin portraying the czar’s family on the reverse is the finest of some 50 examples minted, according to Sincona AG. It realized a hammer price of 600,000 Swiss francs ($643,149 U.S.), or 12 times its estimate.

The 1760 pattern ruble from the St. Petersburg Mint is another famed Russian rarity, with two different edge lettering varieties believed to exist. The example in the October auction, much rarer than the other variety, is Extremely Fine to Uncirculated with prooflike fields, and realized a 450,000 Swiss francs ($482,362 U.S.) hammer price, 18 times its estimate.

According to Richter, the second auction will be held sometime in 2013, with the final auction of the Russian collection slated for 2014. Each auction will feature about 2,000 lots, so many lots will offer multiple coins.