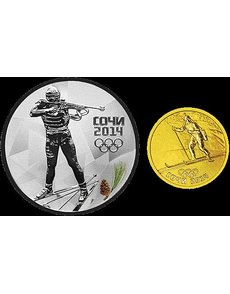 Core to the collector coin issues for the 2014 Sochi Games program are 16 Proof 1-ounce .925 fine silver 3-ruble coins, and eight Proof quarter-ounce .999 fine gold 50-ruble coins. The biathlon is one of the sports honored on both coin types. 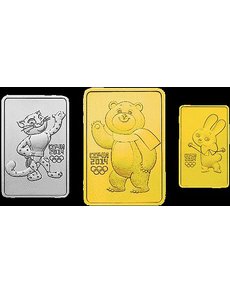 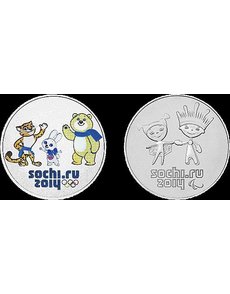 Three different sizes of bullion coins have been issued each year from 2011 through 2013. All three coins of a given year show one of the mascots of the Games. The coins here, one of each year, also represent one of each denomination and one of each mascot.

The countdown to the 2014 Winter Olympic Games approaches its conclusion, with the event set to begin Feb. 6 and continue through Feb. 23.

The Paralympic Games will follow from March 7 to 16. Billions of people across the world will turn their attention to Sochi, a resort town on the Black Sea coast of Russia, for both events.

The Central Bank of Russia has announced and issued 54 circulating, collector and bullion coins to commemorate the Games, in a three-year program that began in 2011.

Four series of coins are available for the Sochi games; series one coins were issued in 2011, and series two coins followed in 2012. The final two series were released in multiple stages in 2013.

The Sochi commemorative coin program has been relatively modest, notably so in comparison with other recent Olympic coin programs that have flooded the marketplace. The 54 Sochi coins are fewer than half the number issued for the London 2012 Summer Games, and fewer than the number issued for the 2010 Vancouver Games, which is known for the multiple coin issues that followed months after the closing ceremony.

Another distinct characteristic of the Sochi program is its widespread unavailability in the United States.

American distributors often wait until closer to the event to offer the coins, and thus far only one distributor has confirmed it will offer any of the precious metal coins.

A representative of Asset Marketing Services, which sells coins as GovMint.com, told Coin World that an agreement between the firm and the United States Olympic Committee was not finalized but that GovMint.com would offer as-yet unspecified “USOC authorized Proofs.”

Dealer Joel Anderson has offered a limited number of the 2011 and 2012 copper-nickel coins but does not presently offer the 2013 releases.

Four major design themes are being celebrated with the 2014 Sochi Games coins, from the sports and mascots of the Games to the natural and cultural heritage of the host country.

In the silver series, the biathlon, Alpine skiing, figure skating and hockey were honored in 2011, with skeleton, snowboarding, ski jumping and freestyle skiing celebrated in 2012.

A floral element appears on each silver coin below the sporting scene.

The bank has followed a similar release schedule for the gold 50-ruble coins.

In 2011, the gold coins honored bobsleigh and curling, with skating and skiing celebrated in 2012. In 2013, series three offered coins for ski jumping and ice hockey, with the biathlon and figure skating commemorated in series four.

The silver ice sledge hockey coin appears to be the only sport coin to depict a Paralympic event.

Athletes and their performances give viewers moments to remember long after the torch has been extinguished, but they aren’t the only characters identified with the Games.

What would a sporting event be without mascots?

Multiple coins have been issued to showcase the furry (and sometimes creepy) creatures that have become staples of the Olympic movement, their fleeting existence captured in metal to forever preserve their place in the Olympic pantheon.

Russia’s coin program has highlighted mascots in both circulation and bullion coinage, the two segments of the program most likely to intersect with most residents of the nation.

Each year one of the three Olympic mascots (Polar Bear, Hare or Leopard) has been featured across all three denominations, the Leopard on the 2011 coins, the Polar Bear on the 2012 coin and the Hare completing the series in 2013.

The three Olympic mascots appear together on a circulating copper-nickel 25-ruble coin, and on a colorful version of the same coin intended for collectors, both issued in 2012.

In 2013, the Paralympic mascots, Fire Boy and Snow Girl, appear together on circulating and colorful collector versions of the copper-nickel 25-ruble coin.

Coins small and large, collector and circulating, celebrate the diverse natural and cultural richness of the host country.

The first coin in the circulating 25-ruble series, issued in 2011, highlights on the reverse Sochi’s nearby Krasnaya Polyana mountains (where some of the events will take place) reflected in the Black Sea. This coin is available in both plain and colorful versions.

Ten million additional plain examples of each of the three previously released circulating 25-ruble coins were issued late in 2013, all dated 2013, bringing the mintage of each design to 20 million pieces. A fourth piece of the circulating 25-ruble coin program, the Olympic Torch Relay coin, was also released late in 2013 with a mintage of 20 million pieces, including its colorized collector version.

The Torch Relay coin includes a map of the Russian Federation, with the path of the Olympic torch relay indicated.

Other coins in the Olympic program celebrate the nature of Russia and the Sochi region, specifically the winter element of the Games.

The term “Russian Winter” conjures up vivid images usually associated with military victories over an exploited opponent. But Prooflike silver coins in the Sochi series share the softer side of the season and blend in other elements of Russia’s vast culture.

The 2011 coin shows men playing the old Russian folk game “Kotjel” and others ice fishing, as well as a scene of whirligig. The 2012 Russian Winter coin shows Shrovetide festivities, as well as a scene of galloping horses harnessed to a sleigh and another scene of a man with the trained bear. Two coins were released in 2013, one showing scenes of winter leisure including sledding and skating, and the other piece showing a snow fort, a snowball fight, ice-hole swimming and dogsleds.

The theme of the silver 200-ruble coin is “Sport Facilities of Sochi,” and it shows the venues in Sochi where the games are being contested.

The gold 25,000-ruble coin details the “History of the Olympic Movement in Russia,” including the famous 1980 Moscow Olympiad, the Kremlin and both summer and winter athletes.

Russia’s Olympic coin program continues a tradition of host nations issuing coins for the event that dates, for the modern Games, to 1951. It is a tradition that seems likely to continue. ¦