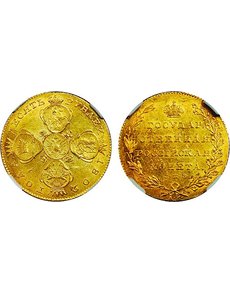 A Russian coin rarity, a gold 10-ruble coin of Alexander I issued in 1802, topped all bidding at $118,000, including the 15 percent buyer’s fee, to lead Stack’s Bowers and Ponterio’s Aug. 16 and 17 world coin and paper money auction sessions in Rosemont, Ill.

Highlighting the results was a gold 10-ruble coin of Alexander I issued in 1802, which the auction house reports is the finest certified Alexander I gold ruble coin. It realized $188,000, with the fee (all prices here include the buyer’s fee).

The auction was held in conjunction with the American Numismatic Association World’s Fair of Money at the Donald E. Stephens Convention Center in Rosemont, Ill.