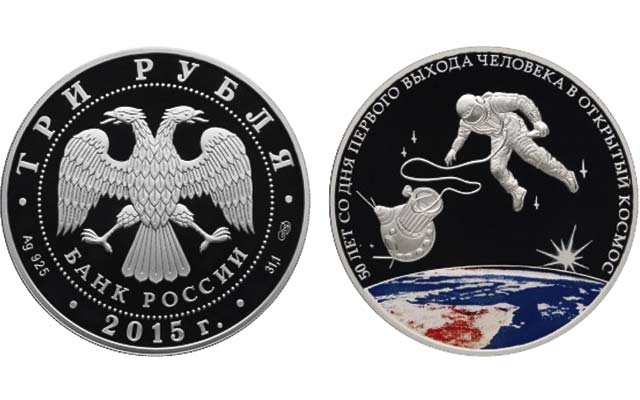 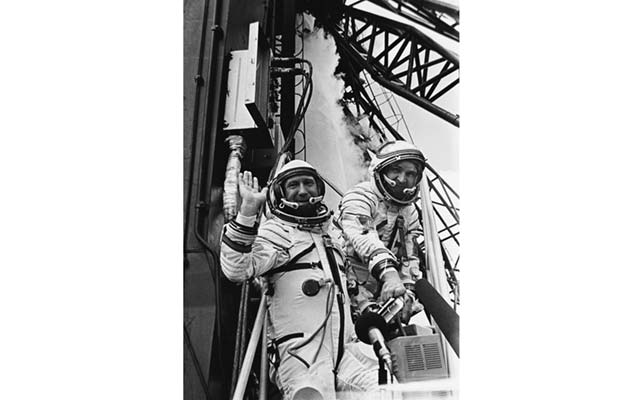 Aleksey Leonov, left, would later command the joint Apollo-Soyuz Test Project mission. He is seen here with Valeriy N. Kubasov, flight engineer, at the launch pad at the Baikonur Cosmodrome in Kazakhstan on the morning of the Soviet ASTP liftoff on July 15, 1975.

He was the first ever person to make a walk in space, and he almost didn’t make it back. At the end of his spacewalk, his suit had inflated so much he could not return through the airlock, so he had to open a valve to release pressure, and he was barely able to get back inside the capsule.

Today, he is the last surviving cosmonaut from the Voskhod missions, and as of April 20, he appears on a commemorative coin from Russia.

The Central Bank of Russia announced the issue of a Proof .925 fine silver 3 ruble coin to celebrate the 50th anniversary of his spacewalk.

The coin shows Leonov on the reverse, floating in space but tethered to the Voskhod 3KD craft.

The earth appears in color in the scene below, and the sun is in the distant horizon. Inscriptions on this side translate to “The 50th anniversary of the first man to walk in space.”

The obverse of the coin depicts the emblem of the Bank of Russia, the two-headed eagle, with various inscriptions in Russian indicating the year of issue, denomination, metal fineness and alloy, as well as the Mint mark of the Saint Petersburg Mint, which struck the coins.

The coin weighs 31.1 grams and measures 39 millimeters in diameter. It has a mintage limit of 5,000 pieces.

Collectors interested in obtaining this coin will have to search the secondary market.