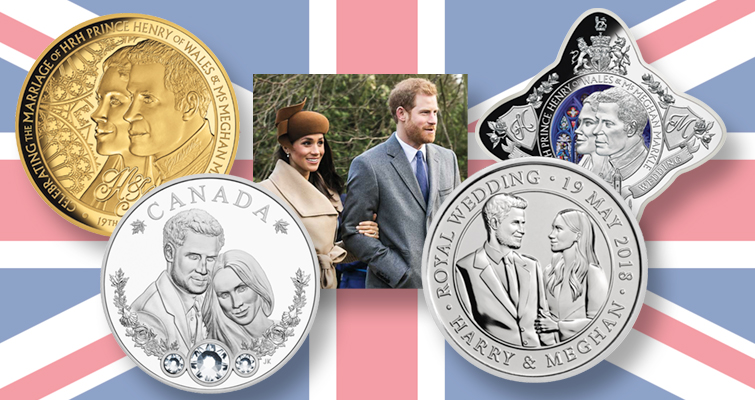 The royal wedding of Prince Henry of Wales (Harry) and Meghan Markle on May 19 has inspired several commemorative coins.

When Prince Henry of Wales (Harry) and Meghan Markle walk down the aisle on May 19, several billion people may watch.

The ceremony will take place at St. George’s Chapel in Windsor Castle.

Like other royal events, the wedding is now the subject of several commemorative coins.

To mark the occasion, the Royal Canadian Mint is releasing a Proof .9999 fine silver $20 coin and reportedly made a $25,000 donation to the Centre for Addiction and Mental Health Foundation in Toronto.

“CAMH holds special meaning for Prince Harry as his mental health advocacy led him to officially visit Canada’s largest mental health and addiction teaching hospital in September 2017,” according to the RCM.

Designed by Canadian artist Joel Kimmel, the reverse design of this coin features an engraving of one of the official engagement photos of the royal couple.

The effigy of Queen Elizabeth II designed by Canadian artist Susanna Blunt appears on the obverse.

The Royal Wedding of Prince Henry and Meghan Markle coin has a limited mintage of 15,000 and retails for $104.95 Canadian.

The Australian coin firm Downies has coordinated the release of two commemorative coins from Niue for the nuptials.

The Proof 1-ounce silver dollar features a rarely seen shape for a coin, a star, and color also accents the reverse.

The coin’s reverse shows a round central portrait of the happy couple set in front of a colorized image of the stained glass windows of St. George’s Chapel at Windsor Castle.

Many other emblems of royalty, including the Rose of England, an exterior view of St. George’s Chapel at Windsor Castle, and the coat of arms of Great Britain with its lion and unicorn supporters, are intricately engraved in the star’s corners.

A 1-ounce gold $100 coin from Niue shows a similar image of the royal couple.

The Ian Rank-Broadley effigy of Queen Elizabeth II appears in the center of each coin’s obverse.

These coins join some issued by the Royal Mint and the Pobjoy Mint, as reported earlier by Coin World. 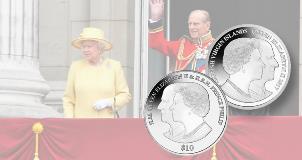 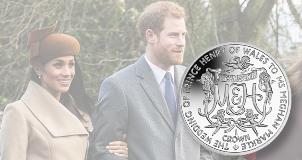 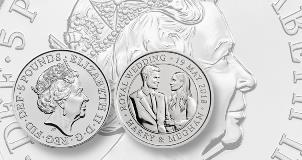