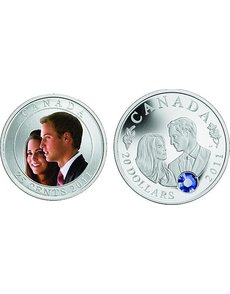 Images courtesy of www.mint.ca. Canada on April 6 announced its plans for and designs of two collector coins marking the April 29 royal wedding. The oversized Specimen 25-cent coin features a colorful image of the couple, while the Proof .9999 fine silver $20 coin bearing a sapphire crystal displays a standard die-struck portrait of the couple. 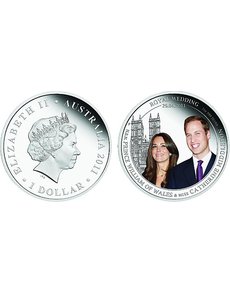 Images courtesy of www.perthmint.com.au. An image familiar to royal watchers appears on the Perth Mint’s Proof silver dollar marking the royal wedding. The colorful image of Prince William and Catherine Middleton on the reverse is taken from the official engagement photo. 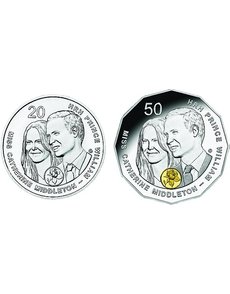 Coins from the Royal Australian Mint marking the royal wedding include a circulating 20-cent coin and a Proof .999 fine silver 50-cent coin with the same design.

The cascade of commemorative coins marking the royal wedding of Prince William and Catherine Middleton continues, with release of many of the coins not expected until after the April 29 nuptials.

Three different world mints in recent weeks have announced coins to mark the event, all noting that delivery would not occur until after the ceremony is held.

All of the designs were approved by Buckingham Palace.

The Royal Australian Mint announced April 12 that it would issue a circulating 20-cent coin and two versions of a noncirculating 50-cent coin, all sharing the same basic design.

The 20-cent coin will be released into circulation after the wedding.

An Uncirculated copper-nickel 50-cent coin will be released April 30, the same day a Proof .999 fine silver, selectively gold-plated version of the 50-cent coin is released.

Vladimir Gottwald’s reverse design depicts a portrait of the couple with their names as legends surrounding and the denomination numerals above their heads. A circle with a single rose appears below the royal couple (and is the area gold-plated on the Proof 50-cent coin).

The 20-cent coin weighs 11.3 grams, measures 28.53 millimeters and has an unlimited mintage. The RAM is selling 20-coin rolls of the coin (a face value of $4 Australian) in a special wrapper for $14 Australian.

Australia’s 50-cent coins are 12-sided in shape and measure 31.51 millimeters in diameter, measured from flat side to flat side.

The Uncirculated version weighs 15.55 grams and has an unlimited mintage. Presented in a plastic holder the size of a credit card, it retails for $8.95 Australian.

The Proof .999 fine silver version weighs 18.24 grams and is offered only in a two-coin set along with the royal engagement coin announced March 29 (Coin World, April 25 issue). That set retails for $175 Australian.

Distributor Downies offers the two-coin set for $161 U.S., not including shipping. Euro Collections International, a division of Downies, offers the specially wrapped roll for $16.75 U.S. and the Uncirculated 50-cent coin for $8.50 U.S.

The Royal Australian Mint’s announcement followed the April 8 news from the Perth Mint, also in Australia, had plans to offer a colored silver dollar that would become available April 29.

A colorful portrait of Prince William and Catherine Middleton graces the reverse of the Proof .999 fine silver dollar designed by Aleysha Howarth.

The image might look familiar to royal watchers: it’s the official engagement photo.

In the background is an image of Westminster Abbey, site of the wedding.

Talisman is the official distributor for the Perth Mint in the United States and offers the coin for $97.95.

To order, telephone Talisman toll-free at (888) 552-2646, or visit the company’s website at www.talismancoins.com.

The RCM’s April 6 announcement of two royal wedding coins was tempered by the added news that release of the coins would be delayed until May 2.

The Canadian effort features an oversized base metal 25-cent coin with a colorful image of Prince William and Catherine Middleton.

The Specimen quality nickel-plated steel coin features an image licensed to Canadian Press, with a side view of Prince William and a three-quarters view of Middleton.

The oversized coin measures 35 millimeters in diameter, as compared to the 23.88-millimeter size of the standard circulating 25-cent coin.

The RCM released no mintage limit for the 25-cent coin, stating only that it will be available “while supplies last.” It retails for $25.95 Canadian.

The other Canadian coin marking the wedding borrows something blue (sapphire, really) that has a prominent role in the romance.

The couple gaze at each other on the reverse of the Proof .9999 fine silver $20 coin, in a design by Laurie McGaw (sculptured by RCM sculptor Jose Osio).

Below the scene is a sapphire-colored Swarovski crystal in homage to the engagement ring, an 18-carat sapphire surrounded by 14 diamonds; the ring was once worn by Princess Diana, Prince William’s mother.

The silver $20 coin also shows a trillium opposite maple leafs, flanking canada on the reverse.

Laser-etched edge lettering features the names of bride and groom in English and French.

The U.S. prices for collectors in the United States buying directly from the RCM will fluctuate with the exchange rate, calculated at the time of purchase.