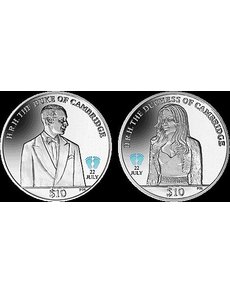 A silver example of the circulating £1 coin, in special packaging to mark the birth of Prince George of Cambridge, was also released.

As the countdown to the birth of the “royal baby” wound down, a different clock was beginning.

It was only a matter of time before mints of the world would begin offering coins celebrating the birth of the Duke and Duchess of Cambridge’s first child, the baby George Alexander Louis, to be known as Prince George of Cambridge.

Within hours of the official palace announcement of the child’s birth (even before he received his name), the Royal Mint and the Pobjoy Mint both announced coins to mark the occasion (though delivery of some of the coins will take until early September).

In addition, the Royal Canadian Mint promised collector coins for the event while congratulating the new parents, but as of press time Aug. 1 had not released details.

The Royal Mint has offered a range of coin products marking the royal birth in some way, noting the event through standard products in commemorative packaging, a standard coin that is distinctive because it was struck on the day of the prince’s birth and a coin available in a special composition.

Sovereign for a sovereign

Among the coins offered (continuing a practice that began in 2012 for Queen Elizabeth II’s Diamond Jubilee), the Royal Mint issued gold sovereign coins struck on the day of an actual historic event, in this case the July 22 birth of Prince George of Cambridge.

The 2013 bullion coins are accompanied by a signed certificate proclaiming they were struck on the day of birth.

The .9167 fine gold coins are of a standard design with no special markings signifying the birth; they show the Benedetto Pistrucci scene of St. George slaying the dragon on the reverse. (All coins described in this article feature the Ian Rank-Broadley effigy of Prince George’s great-grandmother, Queen Elizabeth II, on the obverse.)

Because royals have crowns

Every ruler needs a crown, so the Royal Mint produced and sold a Proof .925 fine silver version of the £5 crown bearing Pistrucci’s traditional St. George design normally associated with the gold sovereign. Used on a silver coin only for very special national occasions, Pistrucci’s design was issued in silver the previous time in 1951 for the Festival of Britain. The 2013 version is limited to the product commemorating the birth.

A Brilliant Uncirculated .925 fine silver £1 coin, part of the Royal Mint’s annual baby gift options, was released in a white box to identify it as part of the royal baby gift collection.

According to the Royal Mint, “The tradition of giving a silver gift to a new baby is centuries old, for silver has long been considered pure and precious.”

It is thought lucky to place a coin into the hand of a newborn, said to bring prosperity in their future.

The coin features Matthew Dent’s design of the Royal Arms on the reverse. The £1 coin weighs 9.5 grams and measures 22.5 millimeters in diameter. Limited to a mintage of 10,000 pieces, the coin costs £60 and remains available at press time.

The final product from the Royal Mint in the baby gift line is the Royal Birth 2013 United Kingdom Definitive Coin set, featuring Brilliant Uncirculated examples of all eight circulating coin denominations, ranging from the penny to the £2 coin.

The set — the standard the BU annual set packaged in a special sleeve — is the first United Kingdom coin set to be issued to celebrate the birth of a royal baby and future heir to the throne. No edition limits have been announced.

The occasion is not simply an opportunity to sell coins — the Royal Mint announced on July 2 that it would give a .925 fine silver penny to a limited number of children born on the same day as the royal baby.

A total of 2,013 silver penny coins marking the birth are being distributed to parents who register and win a drawing through the Royal Mint’s Facebook page, which is found online at facebook.com/theroyalmint.

After “liking” the page, entrants must provide details using the “My Silver Penny” app at the top of the page, and provide an image of the child’s birth certificate, which will be held only for the purposes of eligibility and will not be used for any other reason. All entries must be received by Sept. 20.

The coin is also usually sold by the Royal Mint to be used as a gift for newborns, and is not specially issued for the new price.

Those who cannot wait to find out if they won (and anyone else, for that matter) may purchase the silver penny in one of three packaging options, including either a pink or blue pouch, or packaged in a card. Royal Mint officials have not disclosed whether the coins to be distributed for free will be housed in special or commemorative packaging.

The penny displays a shield of the Royal Arms designed by Dent. It weighs 3.564 grams, measures 20.32 millimeters in diameter and is unlimited in mintage, regardless of packaging; each costs £28.

Among the first to announce special coins for Prince George of Cambridge was the Pobjoy Mint, a private mint located in Surrey, England, that strikes mostly collector coins for countries around the world.

The Pobjoy Mint has issued three designs, each bearing a privy mark noting the birth. Each is available in Brilliant Uncirculated copper-nickel or Proof .925 fine (sterling) silver, with the privy mark plain or colored.

The coins feature designs of a royal nature that have already been released. That, no doubt, sped up the plans to issue the coins once safe delivery of the child was confirmed.

Two of the designs being issued by the Pobjoy Mint are for the British Virgin Islands.

First released in 2012, one design depicts the Duchess of Cambridge and the other the Duke of Cambridge, both shown in the evening attire they wore following their wedding in 2011.

A privy mark has been added to each coin showing baby footprints and the new royal arrival’s date of birth.

On some variants of both of the coins, the footprints are colored blue to represent the baby’s sex.

The third design is issued on behalf of South Georgia & South Sandwich Islands and was first issued in 2012. It shows the newly married couple’s kiss on the balcony of Buckingham Palace. The privy mark added to this £2 coin shows a stork delivering its bundle with the date of the birth, the stork and bundle colored blue on the colorized version.

All of the coins weigh 28.28 grams and measure 38.6 millimeters in diameter.

The copper-nickel coins have unlimited mintage, while the silver coins are limited to 10,000 mintage per design (whether the privy mark is plain or colored).

Four two-coin sets are available of the British Virgin Islands coins: Proof silver and Uncirculated copper-nickel coin sets, both of the colorized and regular versions. Pricing is available through the Pobjoy website, detailed below.