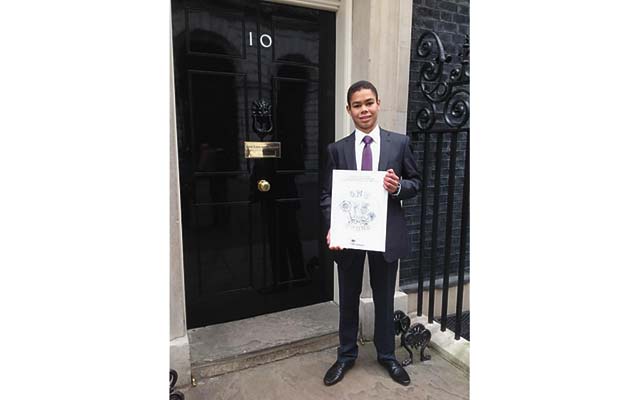 David Pearce with his winning design outside the door of 10 Downing Street (home of the British prime minister). 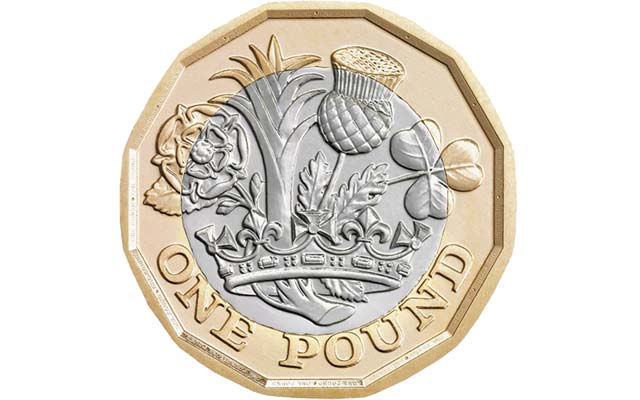 This is the prototype that George Osborne showed David Pearce prior to showing it to Prime Minister and Queen Elizabeth II. 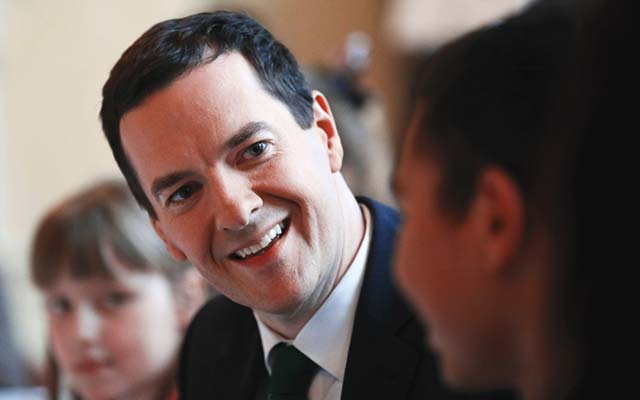 Image courtesy of the Press Association. 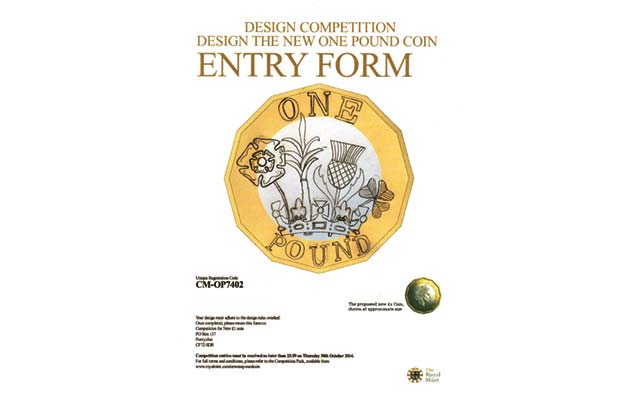 A copy of the entry form submitted to the Royal Mint by David Pearce. 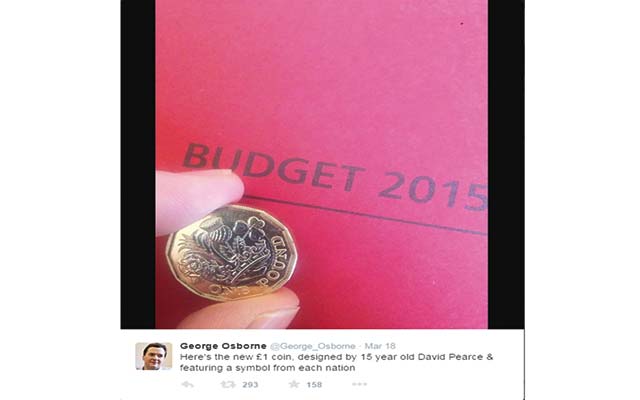 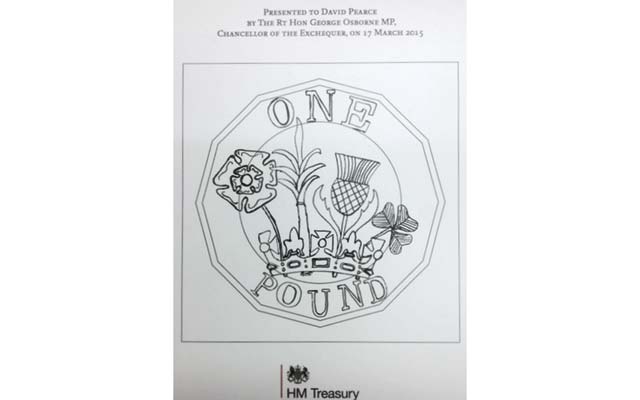 In addition to the £10,000 prize, David Pearce was presented by George Osborne with a copy of his original design.

I was very impressed when I first saw the design of the new £1 coin to be launched in 2017.

When I read that its designer was a 15-year-old schoolboy from Walsall, a large industrial town in the West Midlands northwest of Birmingham, the United Kingdom’s second largest city, I was intrigued. The design had a maturity that I would not have suspected was the work of a teenager.

The Royal Mint and the Treasury kindly arranged for me to speak to David Pearce, who attends Queen Mary Grammar School, which is named for Queen Mary I, the patron when the school was founded in 1554.

RELATED: New £1 coin's reverse was designed by a 15-year-old student

Paul Hughes, who teaches design technology at the school, suggested that Pearce should enter the Royal Mint’s competition that was launched last September.

The contest was advertised in a very trendy brochure with the front reading, “Your art, in everyone’s hands. Your one pound coin. Your opportunity to design the new United Kingdom £1 coin.”

The competition was open to anyone irrespective of age or nationality, though entrants under 18 had to obtain the consent of a parent or guardian. Then of course there was the all-important brief. In essence, “The design, which should symbolise Britain, will feature on the reverse side of the new coin.”

Entrants were invited to ask themselves, “What does Britain mean to you?”

Hints and tips designed for professionals and budding beginners alike were also provided.

??Try to create a design that represents Britain in a clear and unambiguous way.

??Whatever you chose as your inspiration, it must be readily understood to represent Britain. Think of symbols, heraldry, words, aspects of the natural world, man-made structures such as buildings and monuments, British achievements, whether social, political or cultural, and British institutions.

??Find a simple way of conveying your ideas so other people can tell what they are.

??You will need to create a design that fits within the 12-sided shape, and think about a design that works with the bi-colour composition.

??Successful coinage designs commonly feature emblems or symbols and are often heraldic in their inspiration.

??Above all, try to imagine how the design will look on a coin in your pocket.

“I spent a lot of time researching what coin designs looked like and what sort of designs would represent all parts of the U.K. before starting work,” Pearce said.

He researched heraldic symbols, coats of arms, flags, as well the individual flora of the four constituent nations of Britain. He chose the latter to represent what technically are three countries and one principality (Wales) — the English rose, the Scottish thistle the shamrock for Northern Ireland and the Welsh leek. The flora is featured emerging from a crown.

Entrants had to register online to enter the competition and then download a template with a unique reference code.

There was no limit to how many entries could be submitted. The designs could be submitted in pencil, ink, paint, or using computer drawing or design software. Three-dimensional entries including collages or models were not accepted. The entries had to be completely anonymous — not even initials were allowed on the submissions.

So, how did Pearce hear he had won?

On March 16, “The headmaster told me there was a call coming down from London,” he said.

“When I answered, a voice said, ‘Hello this is George Osborne.’ I was absolutely speechless. Then he said, ‘I have some good news for you. You are the winner of the £1 competition. Your design is going to be on the next £1 coin.’ ”

Pearce could not believe it, but there was another surprise. The next day he went to London with his headmaster, design teacher, and Cody Gill, a boy also from Queen Mary’s. Gill had also entered the competition.

“We went to 10 Downing Street and saw the State Dining Room, the Cabinet Room and we later met George Osborne,” Pearce said.

As well as being Chancellor of the Exchequer, Osborne is Master of the Mint.

Osborne found the time to have tea with David and the six “highly commended” young entrants in the contest, doing so the day before the budget was announced.

It is also remarkable that one school should produce the winner and a “highly commended” entrant.

Pearce said with glee, “Mr. Osborne showed me and let me handle a prototype of the coin. I was shown it before the Queen and the Prime Minister. Mr. Osborne said, ‘I hope the Queen likes it.’ ”

Pearce quickly added, “I think she does.”

After Pearce told a reporter at the launch how he had learned that he had won, Osborne quipped, “That was one of the best calls I have ever made in this job.”

Osborne explained why the competition was held and what was special about the winning entry.

“The pound coin is in everyone’s pocket and we are giving it a complete makeover. We wanted members of the public to enter with their designs ... It’s brilliant — it includes all the symbols of Britain emerging from the crown. It is an absolute classic. Now we are going to make 1.4 billion of those and get them into circulation.’ ”

Designing a coin is a very specialist task and requires expert knowledge that not even professional designers possess, but very few alterations were made to Pearce’s original design.

Stephen Raw, a member of the Royal Mint Advisory Committee on the Design of Coins, Medals, Seals and Decorations, is probably the foremost expert on calligraphy in the United Kingdom. He altered the positioning and typeface of ONE POUND. The eminent numismatic artist David Lawrence also made some minor tweaks relating to the stems of the flora. These minor adjustments have enhanced an existing brilliant design that will be admired by the public for decades after the coin is placed into circulation.

The new design was necessary because the high value coin has attracted forgers.

The Royal Mint now estimates that 45 million counterfeit £1 coins are in circulation. This represents 3 percent of the circulating total, though in some parts of the country, it could be as high as 6 percent. Around 2 million fakes are removed from circulation each year, at a cost to the taxpayer.

As the £1 coin has become more vulnerable to increasingly highly sophisticated counterfeiting, it was decided that it was necessary to introduce a highly secure coin to protect the long-term integrity of the currency.

The Royal Mint is still in talks with the cash handling industry to model the withdrawal process of the current £1 pieces. While the new coin will be launched in 2017, the precise date and specification of it has not been finalized. The co-circulation period of the new and the old £1 pieces also has to be determined. As no other U.K. coin denomination has been subjected to attack by counterfeiters, there is no plan to upgrade other circulating coins.

The new 12-sided £1 coin will be made of a ringed bimetallic construction of silver- and gold-colored metal.

The Royal Mint reports that the proposed number of features it will be introducing will make the new £1 the most secure coin in the world. This anti-counterfeiting technology, which can be authenticated by high-speed automated detection devices, is a success for U.K. science and manufacturing. What is regarded as world-leading security technology has been developed in-house at the Royal Mint in Llantrisant, South Wales.

Osborne said at the at the launch, “Designing the new £1 coin was a brilliant opportunity to leave a lasting legacy on what will be the most secure coin in circulation anywhere. The competition captured the imagination of thousands of people.”

The Royal Mint received more than 6,000 entries. The designs included cups of tea, flags, maps, the weather, famous writers, seaside piers, and even the Rolling Stones’ motif of a characterized face with a large tongue protruding from the mouth. As this latter was a John Pasche design of 1970, it was not the original work of the entrant.

Pearce, however, is not the youngest person to win a Royal Mint design competition. In 2009, 9-year-old Florence Jackson won a competition in conjunction with the children’s long-running TV program Blue Peter for a 50-penny design to commemorate the London 2012 Olympic and Paralympic Games.

However, Pearce is the youngest person to design the reverse of a £1 coin. When it is launched in 2017, it will bear the fifth head of the queen, designed by Jody Clark, aged 33 when his design was chosen.

With a combined age of 48, I think we can safely say that this the first British coin to have been designed in living memory by the youngest designer duo.

Currently David favors architecture and civil engineering as a career because he likes “larger things” than coins. However, he does add, “This may change.”