Royal Mint warns of increase in fake £1 coins in 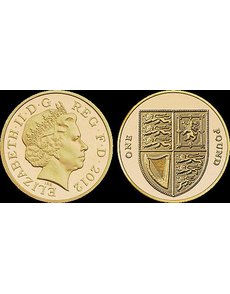 Although this 2012 £1 coin of the United Kingdom is genuine, a recently released Royal Mint survey estimates that more than three in 100 £1 coins in circulation there are counterfeit, an increase from the previous survey.

Slightly more than three in 100 £1 coins in the United Kingdom are fake, the Royal Mint has confirmed.

The results were determined in a twice-annual survey, results for which were released in early April.

The latest survey, completed in November 2011, found that the rate of counterfeit U.K. £1 coins in circulation at the time of the survey was 3.09 percent, up from 2.94 percent in March 2011.

The number of fake £1 coins has tripled since 2003, when the Royal Mint said 1 percent of the coins in circulation were fake.

Public awareness of the counterfeiting of the coins has risen in recent years, in part because of the conviction of one counterfeiter and a campaign by a coin collector in the United Kingdom.

In December 2007, Marcus Glindon was convicted of producing 14 million fake £1 coins for two other individuals. The Royal Mint in September 2008 revised its estimate of fake coins to 2 percent, after a very public campaign from Ken Peters, president of the Counterfeit Coin Club in the United Kingdom, the Royal Mint (Coin World, March 30, 2009).

People holding a counterfeit coin are urged to turn them in to banks or police, but they will not be reimbursed. The Guardian newspaper reported that there are few actual reports of any residents turning in fakes to police stations, however. While spending a fake coin knowingly is a crime, being an unwilling victim is not.

The Royal Mint released a statement about the surveys and the threat the denomination faces:

“The Royal Mint regularly conducts surveys to estimate the level of counterfeit £1 coins in the UK. ... No other denomination is believed to be under threat from counterfeiting.”

The Royal Mint, in conjunction with the Treasury, Payments Council and the Serious Organised Crime Agency, said it “is committed to maintaining the integrity of the UK’s currency and exploring ways in which counterfeiting can be combated.”

The Royal Mint has published a list of all 19 different designs that have been used for circulating £1 coins since the debut of the “round pound” in 1983, along with the edge lettering that should appear on them.

The list, as well as other tips to avoid fakes, may be found at a special page on the Royal Mint’s website: www.royalmint.com/discover/uk-coins/counterfeit-one-pound-coins.

Other clues that a particular £1 coin is not genuine include:

? The date and design on the reverse do not match (the reverse design is changed each year).

? The lettering or inscription on the edge of the coin does not correspond to the right year.

? The milled edge is poorly defined and the lettering is uneven in depth, spacing or is poorly formed. The obverse and reverse designs are not as sharp or well defined.

? For a coin should have been in circulation for some time based on its date, the coloring on a counterfeit appears more shiny and golden than it should, and the coin shows no sign of age.

? The color of the coin does not match that of genuine coins.

? The orientation of the obverse and reverse designs is not in line.

The round nickel-brass £1 coins weigh 9.5 grams and measure 22.5 millimeters in diameter. ¦