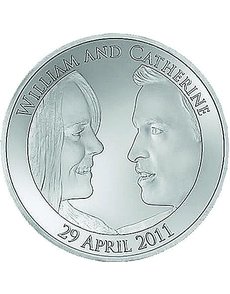 Designs for the official United Kingdom commemorative £5 coins celebrating the royal wedding are now public. The Royal Mint unveiled the designs in an e-mail blast Feb. 25 and immediately began accepting orders for six different versions of the coin, including the Proof .925 fine silver version shown here.

Invitations are in the mail, and now the coins are on order.

The Royal Mint immediately began accepting pre-orders for six different collector options, promising to deliver the coins before the wedding. Delivery will begin once the design is presented for and receives final approval March 16.

Interest in the coins was so high that, 20 minutes after the announcement, the RCM Web site (www.royalmint.com) was briefly inaccessible, presumably due to a rush of viewers prompted by the e-mail announcement.

“Royal Mint customers are the first to see the approved design and you can reserve your official Royal Wedding £5 coin today. Every product will have an issue limit, some especially low, so we would encourage you to act today to avoid disappointment, and secure your own official piece of UK history,” the Web site said.

Inside a circular border on the reverse appears a close-up of the couple, facing each other, in a design by Mark Richards.

After being stung by critics for the design on Royal Engagement coins struck for Alderney (which showed the bride-to-be as uncharacteristically puffy in the face), the Royal Mint’s design for the official United Kingdom commemorative coin offers a more realistic portrayal, judging by the design rendering released.

The legend william and catherine appears in the outer border above, with the wedding date, 29 april 2011, in the lower border.

The £5 coin has received approval from Queen Elizabeth II, who appears on the obverse in the effigy by Ian Rank-Broadley (Prince William also approved the design, according to the Royal Mint).

The final step in the approval process will occur when the design is presented at a meeting of the Privy Council on March 16, at which point the design will pass into law to become official U.K. legal tender, according to the Royal Mint.

Six different collector versions are being offered, with varying metals and mintage limits.

The BU coin, which has a mintage maximum of 250,000 pieces and comes in a presentation folder with a slip case, costs £9.99.

The Proof silver £5 coin and gold-plated silver coin are housed in display cases with certificates of authenticity.

A piedfort or double thick version of the Proof silver coin is also offered.

The piedfort coin weighs 56.56 grams but has the same diameter as the normal thickness coins.

With a mintage limit of 3,000 coins, the piedfort is offered with a numbered certificate of authenticity for £89.99.

The Royal Mint also offers a .986 fine gold version, and a platinum version of unspecified fineness (likely .9995 fine, based on past issues).

Size and weight specifications for the gold and platinum coins were not immediately available at press time Feb. 25.

Each will be offered in its presentation case and with a uniquely numbered certificate of authenticity.

The Royal Mint is counting on the coin to be a winner.

“Public interest in this great event is already huge, and building every day, so we are anticipating massive demand for these official commemorative coins.”