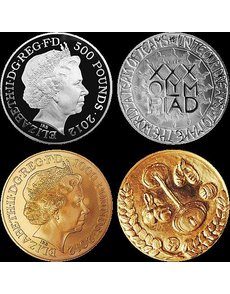 The Royal Mint, in partnership with the Royal Academy, on Nov. 22 unveiled Britain’s first ever kilogram-sized coins.

The reverses of the Proof .999-fine silver £500 coin and Proof .999 fine gold £1,000 coin were designed by two different Royal Academicians. The designer of the gold coin is Sir Anthony Caro, considered one of the most influential sculptors of modern times, according to the Royal Mint. The designer of the silver coin is renowned artist, composer and writer Tom Phillips.

The coins mark the 2012 London Summer Olympic and Paralympic Games.

Caro treated the commission as if for a sculptural medal.

The design “was inspired by how the Olympic and Paralympic Games focus on success and pushing the body and mind to their limits, and therefore emphasis has been placed on the laurel crown of the victor, an ancient symbol of the Olympic games,” according to the Royal Mint.

Phillips’ design for the silver kilogram coin focuses on the idea of the cooperation of teams working in unison to achieve collective success and victory.

Phillips makes use of a style of lettering familiar from sculptures and paintings he has created in the past for the words UNITE OUR DREAMS TO MAKE THE WORLD A TEAM OF TEAMS to frame the outer edge of the coin. The pennants are intended to be celebratory flags, creating a sun for the Games, while also being representative of the Olympic flame.

Phillips’ works have been held by some of the world’s most prominent museums including the Tate Gallery and the National Portrait Gallery (United Kingdom) while Caro’s commissions “have played a pivotal role in the development of 20th-century sculpture,” according to the Royal Mint.

Sir Anthony, knighted in 1987, was the first British sculptor since Henry Moore to receive the Order of Merit, in 2000. The Museum of Modern Art in New York City staged a major exhibition of his works on its roof earlier in 2011.

The two designs for the coins are the result of the first collaboration between the Royal Academy and the Royal Mint.

The coins are legal tender and were approved by Queen Elizabeth II.

Both coins will have a minimum guaranteed weight of 1,000 grams, and both coins measure 100 millimeters in diameter.

Both kilogram coins are presented in crafted, specially designed presentation boxes accompanied by individually numbered certificates of authenticity. Caro personally signed and numbered the certificates for each gold kilogram coin.

Striking kilogram coins has recently become part of Olympic commemorative coinage tradition, regardless of host nation, but the Royal Mint had to receive a legislative victory to issue them in Great Britain, as reported Nov. 15 online at www.coinworld.com/articles/royal-mint-to-issue-silver-gold-kilogram-coin/.

Before passage of a technical amendment that received royal assent Nov. 3, wording of the Coinage Act of 1971 prevented the Royal Mint from legally striking 1-kilogram coins for the United Kingdom.

The Coinage Act mandated how the average tolerance or variance of weight of coins was to be determined, calculated for weights up to 1 kilogram worth of coins; the act did not make provisions for coins that weigh 1 kilogram.

Without passage of the technical amendment, the Royal Mint would have had to scrap its plans for kilogram-sized coins despite a commitment to issue them as part of the bid for the 2012 Games. Scrapping the plans would have forced the Royal Mint to “consider an alternative product to fill the gap” in the commemorative coin program, according to Feb. 4, 2011, testimony in the House of Commons.

“However, none of the alternatives would have anything like the appeal of the 1 kg coin. There is a global expectation that the Royal Mint and the London 2012 Olympic coin programme will follow in the footsteps of London’s predecessors,” according to Lancaster’s testimony.

The mintage limit for the silver coin was incorrectly listed in the testimony as 14,000 pieces.

The first kilogram coin was introduced in 1992, according to Lancaster’s testimony, and most Olympic Games host nations in recent years — for example, Australia, Canada and China — have issued such coins, which have proved popular with collectors internationally.

The amendment also enables the Royal Mint to strike kilogram coins for other themes of cultural significance and historical anniversaries, as well as sporting occasions, “leveling the playing field on which the Royal Mint can compete, appealing to collectors worldwide, even at the top end of the market,” said Justine Greening fellow minister of Parliament and economic secretary to the Treasury, during the Feb. 4 testimony.

The Diamond Jubilee in 2012 is another possible theme for kilogram-sized coins.

The Olympic kilogram coins would not, however, be the first kilogram coins struck by the Royal Mint; it has previously issued such coins for Alderney (including such a coin marking the 2011 royal wedding of Prince William and Catherine Middleton in April).