Royal Mint unveils designs for 2015 Year of the Sheep coins 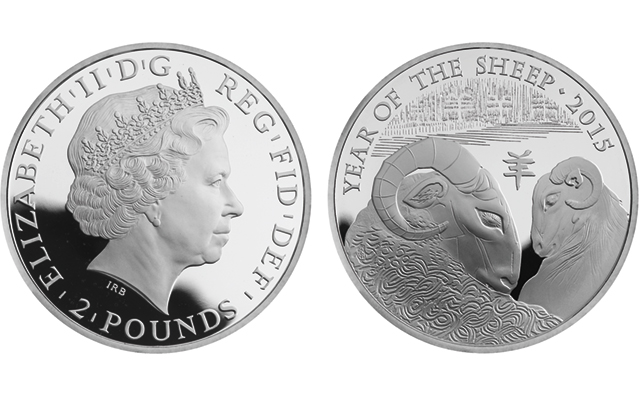 The Royal Mint features a native sheep, in a design created by a British-Chinese artist for its 2015 Year of the Sheep coins, including this Proof 1-ounce, .999 fine silver £2 coin. 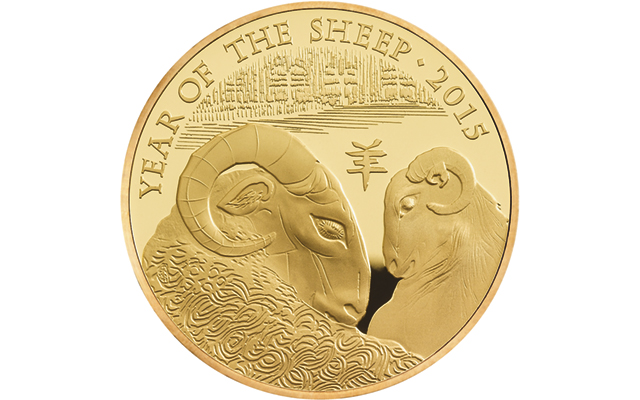 The same design is employed on the Proof 1-ounce, .9999 fine gold £100 coin, one of three coins issued in gold as part of the program.

To design the Royal Mint’s annual Chinese Zodiac series coins for the 2015 Year of the Sheep, the Royal Mint reached out to an artist that bridges two cultures.

The artist, in turn, stayed within the United Kingdom to feature a uniquely British species of sheep.

The Royal Mint on Aug. 19 unveiled the designs for its annual Lunar Calendar coins, with Proof silver, gold and gold-plated silver versions available imminently. Bullion examples, without the severely limited mintages and higher premiums, are not expected until November.

The 2015 Year of the Sheep coins are the second release of the United Kingdom’s first lunar animals program.

Known as the Shengxiào (or Chinese zodiac) Collection, the Royal Mint’s Lunar coin series reflects the Shengxiào tradition, linking each year to one of 12 animals, with the animal traits attributed to those born in a given Lunar year.

Artist/printmaker Wuon-Gean Ho, who designed the 2014 Year of the Horse coins for the Royal Mint, continues the collection with a design that reflects her combined British and Chinese heritage.

The common reverse for all the Lunar coins shows a pair of sheep, facing each other, with the Chinese symbol for the Lunar Year in the background, between the animals and a stylized landscape.

The animals are members of a particular British breed called a Swaledale, which can be found predominantly in the heart of the Lake District, Yorkshire and the North of England, although the breed can be found elsewhere too, said Jenny Manders of the Royal Mint’s press office.

In creating the design, Wuon-Gean was inspired by her veterinary experience and memories of the lambing season. She worked in shifts with hours of waiting before periods of busy and rewarding work, seeing new lambs come into the world and watching the mother and child bond.

Thee Royal Mint said the artist recalls observing sheep as part of the British landscape—in the grounds of Blenheim Palace, on the hillsides of the Peak district, and in the rolling Brecon Beacons National Park in Wales.

Six limited-edition precious metal versions have been announced for collectors, with the complement of bullion pieces to be announced in November.

The Ian Rank-Broadley effigy of Queen Elizabeth II appears on the obverse of each coin along with the denomination and other inscriptions.

A Brilliant Uncirculated, tenth-ounce £10 coin weighs 3.13 grams and measures 16.5 millimeters in diameter. Its mintage is limited to 2,888 examples, and the coin retails for £225.

The final coin in the series is a Prooflike 5-ounce £500 coin.