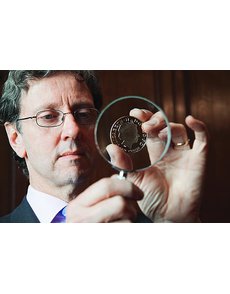 Sculptor Ian Rank-Broadley examines a United Kingdom coin bearing the current effigy of Queen Elizabeth II, which he designed and which made its debut in 1998, as seen on the obverse of a 2011 £5 coin celebrating Prince Philip’s 90th birthday. 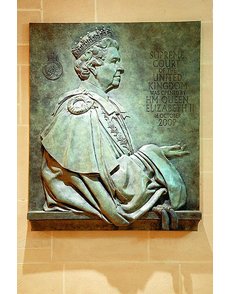 A sculpture of Queen Elizabeth II in the Supreme Court of the United Kingdom by artist Ian Rank-Broadley is the basis for a new effigy on United Kingdom coinage. Royal Mint officials say the coin design will not be released until October, although they have confirmed that a new effigy will be used.

Photo copyright The Supreme Court of the United Kingdom. 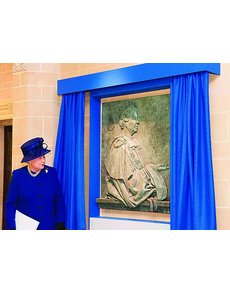 A sculpture of Queen Elizabeth II in the Supreme Court of the United Kingdom by artist Ian Rank-Broadley is the basis for a new effigy on United Kingdom coinage. Royal Mint officials say the coin design will not be released until October, although they have confirmed that a new effigy will be used.
Previous
Next

A new portrait by a familiar artist will appear on coinage to honor Queen Elizabeth II’s Diamond Jubilee — the 60th anniversary of her accession to the throne — in 2012.

A Royal Mint official initially asked that Coin World not publish a story about the new effigy until October. However, Coin World informed the official that it would publish the article because details about the new effigy had already been revealed through a publicly available government document. That document authorizing the coins also identified the sculpture that is the source for the effigy. The agency where the sculpture is on display identified the sculpture’s designer before the Royal Mint’s Aug. 12 press release was issued.

The coins will feature a new effigy designed by Ian Rank-Broadley. According to the government documents, the obverse will carry an effigy “inspired by the sculpture mounted in the entrance to the Supreme Court building on Parliament Square,” created by Rank-Broadley and installed in 2009. The bronze bas-relief carries a portrait of Queen Elizabeth II in garter robes, and was commissioned by the Law Lords for the new Supreme Court building in Parliament Square, according to details published at Rank-Broadley’s website, which published all the details cited here regarding the plaque. The plaque is based on a sitting with the queen at Buckingham Palace in December 2006.

The sculpture, which measures 84 millimeters wide and 107 millimeters tall, is mounted in the lobby toward the front of the court. It was unveiled Oct. 16, 2009.

Though the portrait is new, the artist is not new to United Kingdom coinage — Rank-Broadley also designed the current effigy, which was announced in fall 1997 before making its debut on coinage in 1998.

His new effigy will be the fifth effigy of Queen Elizabeth II on coins of the United Kingdom. According to the Royal Mint press release, the new design will be featured “exclusively” on the Diamond Jubilee commemorative coins, suggesting that it will not replace the current portrait on circulating coins.

Rank-Broadley declined to comment about the new effigy, deferring the matter to the Royal Mint.

The Royal Mint will celebrate the Diamond Jubilee with six different versions of a £5 coin, all sporting the new effigy.

The reverse will feature “an adaptation of the effigy first used on UK coins from 1953,” according to the document, referencing the Mary Gillick effigy of the queen that was in use in the United Kingdom from 1953 to 1967 before the Arnold Machin portrait replaced it.

An olive branch and ribbon are added to the Gillick design. The ribbon appears below the portrait and gives the date 2012 and reads dirige devs gressvs meos, which translates to “May the Lord direct my steps,” which famously appears on the Proof 1839 Una and the Lion gold £5 pattern coin depicting Queen Victoria.

The legend points to historical links between the famous rulers, who both have enjoyed lengthy reigns. Queen Elizabeth II’s reign is second in length only to that of Queen Victoria, who served from 1838 to 1901.

Some clues in sculpture

However, the sculpture reveals a few clues as to how the new effigy will differ from the current Rank-Broadley effigy.

His new design shows a slightly older monarch, the aging visible in the skin around her eyes and in the depth of her cheek, which is more pronounced on the sculpture than in the current effigy. Some differences noted between coin and sculpture also could be explained by limitations in the depth of field for modern coinage production.

Each coin will be round and measure 38.608 millimeters in diameter, with an allowed variance of .125 millimeter.

The copper-nickel coin is struck from 75 percent copper and 25 percent nickel, and will weigh 28.276 grams, the same weight as the .925 fine silver version.

According to one government document, the gold-plated silver version will also weigh 28.276 grams, but will feature .999 fine gold plating with a standard weight of .10 gram. The document does not explain the discrepancy between the stated weight of coin, said to be the same as the unplated version, and the weight of the additional gold plating.

The finenesses of the gold and platinum coins and the weight of the gold coin were not identified in the document or Mint statement.

An edge inscription, a vow made good, will appear on the silver, gold and platinum coins, while the copper-nickel and gold-plated silver coins will have reeding on the edge. ¦