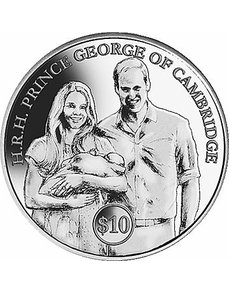 The Pobjoy Mint is issuing coins for the British Virgin Islands to mark the Oct. 23 christening of Prince George of Cambridge. 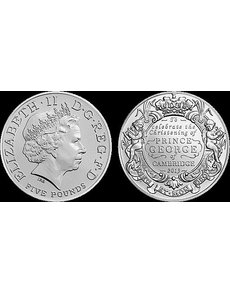 The Brilliant Uncirculated £5 coin struck in copper-nickel and retailing for £13 has unlimited mintage. It bears the slightly less intricate version of the two designs. 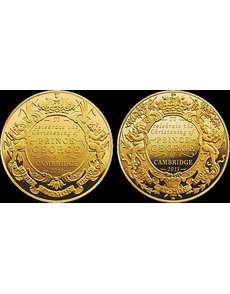 Britain’s Royal Mint has released designs for the nine coins it is issuing to celebrate the christening of the Duke and Duchess of Cambridge’s first child, George Alexander Louis.

In addition, the Pobjoy Mint has released a design in the same theme, to be offered on two coins for the British Virgin Islands.

The christening of the baby Prince George of Cambridge is scheduled for Oct. 23, at the Chapel Royal at St. James’ Palace. The christening will be performed by the Archbishop of Canterbury, the Most Reverend Justin Welby.

Prince George will be christened in a replica of the intricate lace and satin christening gown made for Queen Victoria’s eldest daughter in 1841, according to the Pobjoy Mint.

The Royal Mint’s program marks the first time that new coins of the United Kingdom have been produced to mark the christening of a member of the royal family.

The program is capitalizing on this “first” status with an extensive range of options, ranging from a Brilliant Uncirculated copper-nickel version £5 coin to kilogram-sized silver £500 and gold £1,000 coins.

All coins feature a reverse design by John Bergdahl paired with the Ian Rank-Broadley effigy of Queen Elizabeth II on the obverse.

Approved by the Duke and Duchess of Cambridge, Queen Elizabeth II and the chancellor of the exchequer, the coins feature the lily baptismal font that plays an important role in royal christenings. Many elements of the coin design are taken from the sculptural elements of this font.

On the reverse, swags of lilies ornament the inscription, which is flanked by two harp-playing cherubs to balance the design perfectly. The motto at the foot of the coin is the traditional dieu et mon droit or “God and my right,” the motto of Prince George’s great grandmother, Queen Elizabeth II.

Bergdahl said: “The design is baroque, a style that has been reborn many times and often featured in Royal artwork and traditions. One element that I knew I wanted to incorporate was the lily font from the Tower of London, which is a strong tradition in christenings for the Royal family. The motto is traditional and sums up the expectation carried by a young child, born to reign. ...”

A more intricate version of the design will grace 5-ounce and kilogram silver and gold coins, as these have larger areas that allow for more detail. Additional floral ornamentation appears, and some elements (like the benches upon which the angels rest) are modified slightly in the larger design.

The Brilliant Uncirculated £5 coin weighs 28.28 grams, has unlimited mintage, retails for £13 and is packaged in an informational folder.

The Proof silver £5 coin weighs 28.28 grams and has a mintage limit of 12,500 coins. Of that total, 12,350 are offered in display cases, each with a certificate of authenticity and booklet, for £80 each. The Royal Mint has not disclosed how the other 150 Proof silver £5 coins may be sold (and discrepancies exist between mintage limits and sales limits for the other Christening coins, as well).

The Proof piedfort silver £5 coin weighs 56.56 grams and has a mintage limit of 2,500 coins. Of those, 2,250 are being offered in display cases, each with a certificate of authenticity and informative booklet, for £160 each.

The Proof .9167 fine gold £5 coin weighs 39.94 grams and is limited to a mintage of 1,000 pieces. Each piece is presented in a display case, accompanied by a certificate of authenticity and booklet, and retails for £2,000.

The platinum coin is a piedfort piece weighing 94.2 grams (no standard size platinum coin is offered). The mintage limit is 100 pieces, 75 of them being offered in display cases, with accompanying booklet and certificate of authenticity for £6,400 each.

The 5-ounce .999 fine silver coin is denominated £10 and is presented with a display case, booklet and accompanying certificate of authenticity. It has a mintage limit of 1,660 pieces, the number reflecting the birth year of the first King George, with 1,160 available individually for £450 each.

Each of the kilogram coins is individually housed in a custom case, with a numbered certificate of authenticity and a booklet.

Most coins are expected to begin shipping on Oct. 28, with the copper-nickel coin delivery estimated to begin Nov. 4, the silver piedfort coin Oct. 21, and the gold kilogram coin due on Nov. 6.

The Pobjoy Mint coins for the British Virgin Islands show the moment when the newest member of the British royal family left St. Mary’s Hospital in London, one day after being born July 22.

The British Virgin Island coins show the baby with his parents and the legend h.r.h. Prince George of Cambridge, but no reference to the christening.

The design is offered in Uncirculated copper-nickel and Proof .925 fine versions, both weighing 28.28 grams and measuring 38.6 millimeters in diameter.

The copper-nickel coin has an unlimited mintage and retails for $16.95, and the silver coin is limited to 10,000 pieces and costs $89.