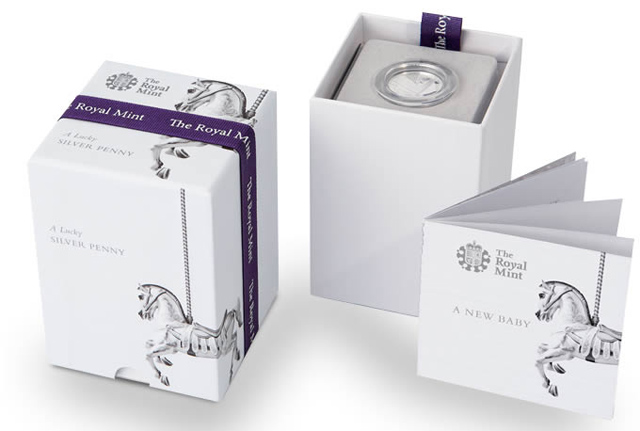 The Royal Mint will send out 2,015 silver penny sets to families who add a baby on the same day the new member of the royal family arrives.

The Royal Mint will continue a thousand-year-old tradition as they honor the birth of Cambridge royalty, along with gifting 2,015 newborn babies with a special edition silver penny.

Before you parents who are expecting get too excited, there is a significant catch.

Babies must be born in the UK on the same day as the Duke and Duchess of Cambridge's second offspring, and parents will have to register the birth of their child within 60 days at the Royal Mint's Facebook page for the chance to claim one of the 2,015 available free pennies.

The penny, a very modern and regal design, will be minted with the circulating penny's Royal Shield design by Matthew Dent and the new, fifth, effigy of Queen Elizabeth II that was unveiled in March. The penny is packaged in a white box that features the image of a silver carousel horse and is finished with a ‘royal’ purple ribbon.

The custom of offering pieces of silver to newborn babies has been happening for an eternity within royal society. Gifting a loved one's newborn child with silver has long been a sign of wishes for for wealth and good health among the British.

The birth of Prince George, the Duke and Duchesses' first son, yielded similar plans in 2013, whan 2,013 silver pennies were made available to UK babies sharing the prince's birthdate.

A singular coin commemorated his birth July 22, 2013, and an additional £5 coin was minted to mark his first birthday in 2014.

Registration details can be found on the Royal Mint's Facebook page, which is linked above.