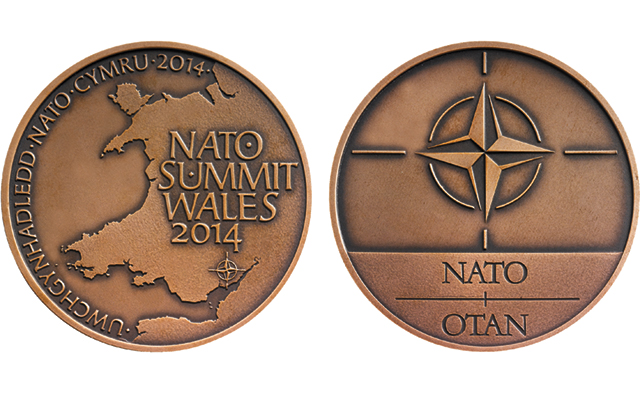 A new bronze medal struck by the Royal Mint will have a limited mintage, for presentation during the NATO Heads of State and Government summit in Wales on Sept. 4 and 5.

When 157 world leaders gather in the Wales in early September, each will take a little piece of history home, from the Royal Mint.

A NATO Heads of State and Government summit is scheduled to be held at the Celtic Manor Resort, in Newport, Wales, on Sept. 4 and 5. The Cabinet of the United Kingdom announced Aug. 13 that the attendees, as well as schools and others, would receive a “commemorative piece” struck by the Royal Mint to commemorate the gathering.

“It may be worth mentioning that this is being referred to as a ‘commemorative piece’, as it is neither a coin nor a medal,” according to the spokesperson.

However, numismatically speaking, it meets the criteria of a medal, that being an item commemorating a theme or event and that has no legal tender status.

Perhaps the lexicographical legerdemain is being employed because some people might conclude the term means medals bestowed for military or other distinction, such as the Royal Mint has produced throughout its history.

In any event, in addition to the single examples to be presented to each of the 157 leaders, each of the 57 schools in Newport will receive a “piece” “as a memento of the special role Newport is playing in the summit,” according to the Royal Mint.

Some of the pieces will be hand-delivered by summit representatives.

The final example was struck Aug. 13 at the Royal Mint, with Wales Office Minister Baroness Randerson joining the deputy mayor and mayoress of Newport for the striking. They were joined by Welsh cadets from across the forces who represent some the schools to receive the medals.

Designed by the Royal Mint engraver Jody Clark, the medal features an iconic map of Wales with NATO SUMMIT WALES 2014 in both English and Welsh on one side and the NATO logo on the other. The Royal Mint has not said which side is obverse and which is reverse.

Each bronze piece is 63 millimeters in diameter.

Clark studied Illustration at the University of Central Lancashire. While at the Royal Mint, he has worked on commissions for Costa Rica, Tanzania, Lesotho and Azerbaijan, some of the more than 60 countries for which the Royal Mint strikes coins and medals.