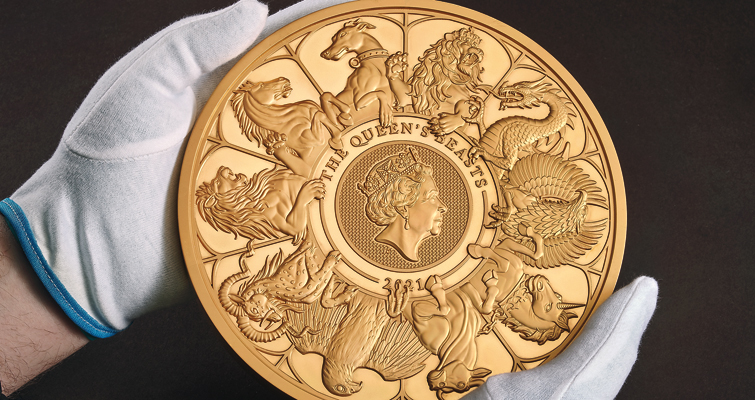 The Royal Mint has made its first ever 10-kilogram gold coin, a £10,000 coin marking the conclusion of the Queen’s Beasts program of silver and gold bullion coins.

To mark the conclusion of the Royal Mint’s Queen’s Beasts series of bullion coins, the Royal Mint chose to do something big — make that really big.

It measures 200 millimeters in diameter.

Only one example was available for public sale, but the Royal Mint has not disclosed the sale price (it’s noted as “price on application,” according to sales material from the Mint), or whether it’s yet sold.

The 10-kilogram gold coin is in what the Royal Mint calls its “Masterwork” series — a new series of larger, one-of-a-kind pieces for collectors, each made using a combination of traditional skills and innovative technology.

The massive Masterwork piece depicts all 10 beasts side-by-side in a single design.

The series takes its inspiration from the 10 stone statues that lined Queen Elizabeth’s route to Westminster Abbey at her Coronation in 1953.

The 10-kilogram coin was created by a team of master craftspeople at the Royal Mint, using traditional minting skills alongside innovative technology.

The Royal Mint begins with modern techniques, with engraving machines carefully cutting the design onto the 10-kilo coin.

A uniquely titled “master toolmaker” then hand works the coin, carefully papering and burnishing the surface of the metal to remove any marks made by the cutting process, to elevate the finish of the design. The piece then undergoes four days of polishing.

Finally, the massive coin is laser frosted to selectively texture the surface of the coin, giving it a matte finish showcasing the detailed finish of the coin’s design — completing 400 hours of work.

The Royal Mint calls the finish Proof, but since it is not struck, that designation does not apply numismatically.

Starting with the Lion of England in 2017, the Queen’s Beasts Collection’s coins have showcased the history and symbolism of each of these royal guardians, including two lions, a griffin, a falcon, a bull, a yale, a greyhound, a dragon, a unicorn and a horse.

Both bullion and Proof collector versions have been issued, as well as base metal issues.

Full details of the program are available at www.royalmint.com/QueensBeasts. 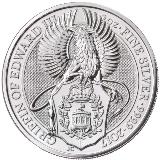 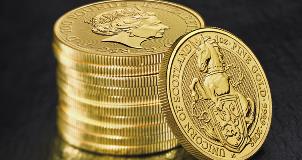