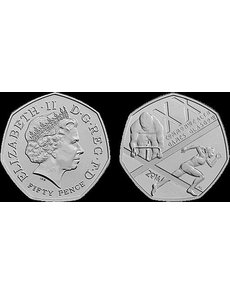 The Royal Mint celebrates the 2014 Commonwealth Games in Glasgow with a circulating commemorative 50-penny coin. 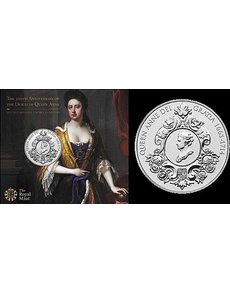 In 2014 the United Kingdom will mark 300 years since Queen Anne’s death with a commemorative £5 coin. 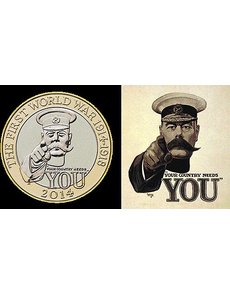 The Royal Mint on Nov. 18 revealed its 2014 commemorative coin themes and designs.

The United Kingdom’s collector coins next year will reflect themes as diverse as the Commonwealth Games in Glasgow, the floral emblems of Scotland and Northern Ireland, an early lighthouse, the death of Queen Anne and the beginning of World War I.

The new coins are available in multiple collector sets, with individual options to be released at varying times over the next year.

The obverse of each coin carries the current portrait of Queen Elizabeth II by Ian Rank-Broadley, with the commemorative design on the reverse. Circulation-quality examples of the 50-penny, £1 and £2 coins will be issued for circulation throughout 2014 as need warrants, and Brilliant Uncirculated versions of the £5 coin will be available at face value through post offices.

The 50-penny coin celebrates the 20th Commonwealth Games in Glasgow.

Thousands of athletes are scheduled to compete in 17 sports across 11 days in one city.

Two £1 coin designs honoring the floral emblems of the British Isles are due in 2014. Designed by Timothy Noad, the collection started with coins featuring the national flowers of England and Wales, and concludes in 2014 with the flora of Northern Ireland and Scotland. The shamrock and flax plant adorn the £1 coin of Northern Ireland, the latter representing the region’s linen-rich history, while the familiar thistle and the classic bluebell are portrayed on the Scottish £1 coin.

Maritime safety became critical as Britain began flexing its influence on the high seas. In 1514 Henry VIII granted a Royal Charter to an agency now known as Trinity House. For 500 years, Trinity House has safeguarded the coastal waters of Britain.

The anniversary is being honored on one of two commemorative £2 coins in 2014.

The Royal Mint’s Trinity House £2 coin, designed by Joe Whitlock-Blundell and David Eccles, depicts a lighthouse lens, an enduring symbol of safety on the seas.

The Royal Mint embarks on a five-year commemoration of the wartime journey from outbreak to armistice, starting with a £2 coin bearing sculptor John Bergdahl’s likeness of a call to arms by Lord Kitchener. Posters showing the British secretary of war pointing at readers were part of a recruitment campaign following the British declaration of war on Aug. 4, 1914.

Designed by Alfred Leete, the scene was the magazine cover on London Opinion dated Sept. 5, 1914. It reads “Your Country Needs You,” which inscription also appears on the coin.

Also announced as a collector coin theme for 2014 is the 300th anniversary of the death of Queen Anne, to be marked with a £5 coin.

Queen Anne — the last Stuart queen — died in 1714, having reigned over the political union of England and Wales with Scotland.

Sculptor Mark Richards designed the coin, which carries her portrait styled as an 18th century miniature surrounded by an elaborate frame incorporating her 1707 Royal Arms.

The 2014 commemorative coins are now available for pre-sale.

The 2014 United Kingdom Definitive Coin set offers Brilliant Uncirculated copper-nickel versions of all eight standard circulating coins from penny to £2 piece. The Royal Mint notes that “not all [denominations] may be struck for circulation” in 2014.

The commemorative designs will be issued to fill circulation demand but, generally, circulating versions of the definitive designs for the corresponding denominations are also issued as need exists. 2011 was the last year that a definitive design was not released into circulation, as the Olympic 50-penny program eliminated the need to produce coins bearing the regular design.

The Definitive Coin set has no edition limit and costs £25.

The 2014 United Kingdom Annual Coin set offers Brilliant Uncirculated copper-nickel examples of all eight definitive coins as well as the six commemoratives for 2014, for 14 coins in the set. The Royal Mint notes again that “not all [of these coins] will be struck for circulation,” apparently a reference to the £5 coin, which is not used in circulation but is available at face value in some circulation venues.

The Annual Coin set has no edition limit and costs £50.

The 2014 United Kingdom Commemorative Proof Coin set features Proof copper-nickel examples of all six commemorative coins. The Proof set has a limit of 7,500 sets and costs £65.

The 2014 United Kingdom Collector Proof set includes all six collector coins, as well as eight definitive coins, all in copper-nickel. The set retails for £110 and has no edition limit.

The 2014 United Kingdom Premium Proof Coin set offers, in addition to the same contents as the Collector Proof set, a medal and a set of prints inspired by the artistry of past engravers, both additions available only in the set. The Premium set has an edition limit of 4,500 pieces and costs £155.

Pricing and mintage details for these latter Proof sets were unavailable at press time.